Book Spotlight: Like Cats and Dogs by Kate McMurray 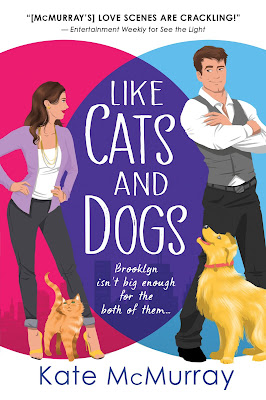 Like Cats and Dogs
(Whitman Street Cat Cafe #1)
by Kate McMurray
Date Released: May 4, 2021
Sourcebooks Casablanca
About Like Cats and Dogs
The fur flies in this hilarious romantic comedy where the owner of a Brooklyn-based cat café and the local vet go ahead to head. The attraction is instant, but can you fight like cats and dogs and still be perfect for each other?
Things are getting ruff in this Brooklyn neighborhood when new veterinarian Caleb Fitch moves in next door to the Whitman Street Cat Café and gets on the wrong side of café owner Lauren Harlow. Lauren has a few things to teach the new vet on the block, and rescuing kittens is only the start...
Lauren can’t ignore her attraction to Caleb, but he gets her even more riled up when he argues with her about how best to treat the cats in her care. Determined to smooth things over, Caleb comes to the rescue when a new litter of abandoned kittens is left on Lauren’s doorstep, and they confront the fiery attraction that’s been building between them from the start. But saving the baby kittens getting them ready for adoption is only the first challenge Lauren and Caleb have to face, and when a real estate developer comes sniffing around their block, they’ll have to work together, or risk losing everything…

An Excerpt from Like Cats and Dogs
Evan walked into the Whitman Street Cat Cafe, pushing through the second door and grinning at Lauren like he’d already had three cups of coffee.
“Derek got married this weekend,” Lauren said by way of greeting.
“Aw, honey, I’m sorry,” said Evan. “Anything I can do?”
“Drive to New Hampshire and punch him in the face?”
Evan tilted his head and seemed to consider doing just that. “As fun as that sounds, Derek is kind of a big guy. He might punch back, and I bruise like a peach.”
Lauren laughed despite herself. She shoved her phone in her pocket. “I’m over it. So my ex got married? It’s fine. I’m fine.”
“Attagirl.” Evan looked up at the menu like he didn’t get coffee here nearly every morning.
“Not that I’m sad for the business,” said Lauren, “but where did all these people come from?”
“Didn’t you hear? The Star Cafe closed last week.”
The Star Cafe was a great independent coffee shop that had, apparently until last week, been right across the street from the Cat Cafe. If it had closed, that explained all the people here, the last place that served coffee between Henry Street and the subway entrance on the next block.
“I’m devastated,” Evan continued.
Lauren raised an eyebrow at him. “If anything, this is probably better for your health. There are only so many cups of coffee you can drink per day because you think the barista is cute before the caffeine gives you heart palpitations.”
Evan sighed and leaned against the counter next to Lauren. “Pablo gave me heart palpitations.”
“Any idea what he’s up to now?”
“When I got my caramel vanilla latte on Friday, he told me he’d applied to work at that little indie bookstore a few doors down. Hope springs.”
“Crazy idea, but you could, like, ask him out.”
Evan gasped dramatically. “Where’s the romance in that? We’re performing an elaborate dance.”
“Right.” Lauren glanced behind the counter, where Monique looked panicked as she took another order. “Maybe I should hire him.”
“He makes a mean caramel vanilla latte.”
A bewildered man with light brown hair walked into the cafe then. Lauren had never seen him before, and she would have noticed. He was so handsome, Evan sucked in a sharp breath.
Lauren had sworn off men ever since Derek had announced his engagement, because she was tired of getting her heart stomped on, but that didn’t mean she couldn’t look. Because this man was pretty foxy. He was tall and fit, with neatly trimmed hair, a square jaw, and blue eyes that sparkled even from behind the dark-rimmed glasses he wore.
“Hello,” said Evan.
The man looked around. When Sadie trotted over to investigate him, he looked a little startled by her presence.
“Oh,” he said, catching Lauren’s eye. “I’ve heard about places like this, but I guess it didn’t occur to me that the cats would just be… out.”
“Only Sadie has free rein in the cafe,” said Lauren. “She’s in charge. She’s also terrified of cars, so she doesn’t try to escape. The rest of the cats are through that door.” She pointed.
“Ah.”
Lauren wasn’t really sure what to say next. Evan elbowed her, though, so she said, “Did you want to see the cats, or—”
“I just need a cup of coffee for now. This place is hopping.”
“Go on,” Lauren said. “I’m not in line and you look like you’re in a hurry.”
The man pulled a phone from his pocket and glanced at the time. “Yeah, a little.” He slid forward. “Thank you.”
“Are you new to the neighborhood?”
“Yeah. Just moved to Brooklyn a week ago, actually.”
“Welcome!”
He shot her a bashful half smile and nodded. “Thanks.”
Monique said, “Next!”
The light-haired man nodded at Lauren and then walked to the register.
Victor, the other barista, must have noticed this guy was a little twitchy, probably with a job to get to—he was wearing a blue oxford shirt tucked into navy blue slacks, the uniform of the Midtown office worker—and he grabbed the pot and poured a cup of coffee right away. Once the man paid, Victor handed him the cup and said, “Milk and sugar are at the end of the counter.”
“Great.” The man took his cup.
“The usual,” Lauren said to Monique now that the line had dissipated. Then she walked over to the man as he shook a sugar packet. “I’m Lauren, by the way.”
The man gave her a genuine smile this time. “Caleb. Maybe I’ll see you around, Lauren.” Sadie meowed and sat at his feet. “And you, too, Sadie.”
Handsome and he liked the cats. No wedding ring. This had some potential.
Oh, except for the part where Lauren was not dating in order to concentrate on making a fulfilling life for herself without a man.
Caleb walked back outside.
“Girl,” said Evan. “He was totally checking you out.”
Warm excitement spread through Lauren’s chest. It had been a while since she’d met anyone who made her pulse race like this. She wondered if Caleb would come back.
“Boss, your coffee’s ready,” said Monique.
Lauren took it gratefully. “All right. Do you have to work today, Ev, or do you want to meet our newest resident? We’ve got a gorgeous new calico named Lucy.”
“I’m meeting a client at ten, so I gotta go, but you can tell me all about Miss Lucy and report back on that tall guy over drinks tonight.”
“Pop at seven?”
“Perfect.”
Monique handed Evan his coffee, which he took with a grin. He blew Lauren a kiss with his free hand and then walked out the door.
“Come on, Sadie,” said Lauren. “Let’s get to work.”
Excerpted from Like Cats and Dogs by Kate McMurray.
© 2021 by Kate McMurray.
Used with permission of the publisher, Sourcebooks Casablanca, an imprint of Sourcebooks, Inc.
All rights reserved. 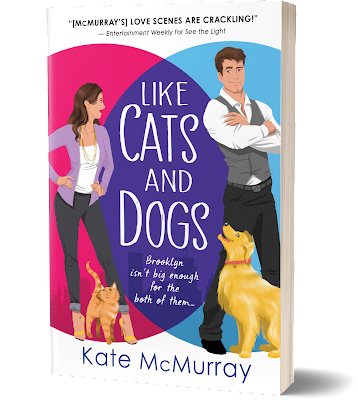 About Kate McMurray
Kate McMurray writes smart, savvy romantic fiction. She likes creating stories that are brainy, funny, and, of course, sexy. She advocates for romance stories by and for everyone.
When she’s not writing, Kate edits textbooks, watches baseball, plays violin, crafts things out of yarn, and wears a lot of cute dresses.
Kate lives in Brooklyn, NY, with two cats and too many books.
Connect with Kate
Website | Twitter | Facebook | Goodreads