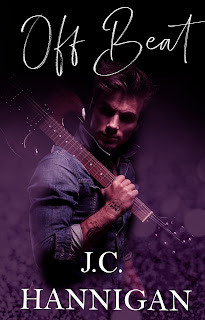 Note: A reader copy was provided by the author via Give Me Books Promotions.
It's been a few years since my last read from J.C. Hannigan, so I welcomed the opportunity to re-acquaint myself with her writing by way of the first book in her Forgotten Flounders series. Off Beat is a second-chance romance featuring high school sweethearts who lead separate lives for nine years. When Calum Jacobs left Harper Morrison without a word of goodbye or explanation, going as far as cutting any means of communication between them, he thought he was doing the right thing. He would go on to pursue his dream of creating his own music, forming a band calling the Forgotten Flounders with his two best friends. Much success and almost a decade later, Calum returns to his hometown after learning of his beloved grandfather's passing. Gramps' last request was for Calum to find Harper and make amends. His leaving may have been a surprise to Harper, but the secret she's kept from Calum is a shock he never saw coming.
This was a pretty good read, one that held a lot of promise but one that also needed quite a bit of editing. I enjoyed Cal and Harper's story, and as is the case with second-chance romances, I appreciated that there was some wariness and hesitation on Harper's end, although she forgave him soon after he went to see her. I wonder if that had to do with her own feelings of guilt, but I won't say why because I refuse to make this very spoilery.
I did have a couple of issues--as I mentioned, this needed editing. From words that were misused (reigns instead of reins) or misspelled (never-the-less rather than nevertheless) to cutting out a good portion of telling rather than showing as well as bit characters who did nothing for the story, I feel like some buff and polish would have made this an even better read. My other issue had to do with Cal being recognized time and again, yet not a peep came out in media regarding why he decided to stay in his hometown. Still, as far as the overall story is concerned, I found it be satisfying, and I look forward to seeing how the revelation of other secrets will play out in upcoming books. 3.5 stars go to Off Beat.
Date Read: 10 May 2021
Learn more about J.C. Hannigan.
Purchase Off Beat on Amazon.