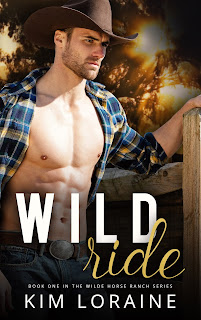 Note: An advanced reader copy (ARC) was provided by the author via Grey's Promotions.
Kim Loraine launches her new series, Wilde Horse Ranch, with two members from rival families who find themselves married and have to stay married for some time. This series also happens to be a spin-off of Loraine's Ryker Ranch series which featured the Ryker brothers. Now, we've got their sister, Serafina, and she shares her story with Sutton Wilde. Now, it just so happens that the Rykers and Wildes don't like each other a whole lot. Their rivalry goes back a generation, all thanks to Sera's mother choosing Sera's father over Sutton's father. There isn't a whole lot of love lost between the two families, so one would expect that news of Sera and Sutton waking up in Vegas with a hangover and the ring fingers on their left hands bearing each other's names would be a shock to everyone. The easy solution would be to get an annulment, but their in for one wild ride.
If I could have chosen the best way for this new series to start, I couldn't have chosen any better than what Kim Loraine has offered her readers. I love a good star-crossed romance, minus the Shakespearean double suicide, and Loraine delivered that with some great lighthearted feels. Sera was an awesome female main character, what with her spunk and sass. But she was also more than that; she was someone who was an independent thinker who knew what she wanted and loved her family. Even though their families were not fans of each other, Sutton has had feelings for Sera for years, and I adored how protective he was of her and how he was all in and strived to create that balance between his love for his family and his love for Sera. This was an enjoyable beginning to the new series, and I can't wait to read more. Wild Ride receives four stars.
Release Date: 17 May 2021
Date Read: 17 May 2021