Review: Caught in Us by Kacey Shea (Caught #4) 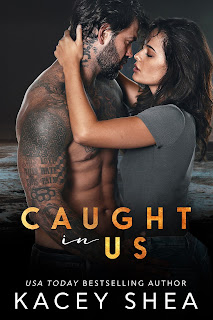 Note: An advanced reader copy (ARC) was provided by the author via Grey's Promotions.
FIVE MONTHS! I've been languishing in cliffhanger purgatory for five months waiting for the release of the conclusion to Chase Matthews and Alicia Martin's story! Okay, "languishing" may be a wee bit of an exaggeration, but hey, waiting for a book you're desperate for is not the easiest thing for a bookaholic like me. But goodness, Kacey Shea made that long wait worth it. I was absolutely caught up in everything Caught in Us (see what I did there?!), and Chase and Alicia get that happily-ever-after that they so deserve.
It's been three years since Chase and Alicia last saw each other. They've led separate lives--hers in London, his in Richmond. But now, Chase's brother and one of Alicia's best friends are getting married, and Chase is the best man and Alicia's just sent her RSVP. So much has changed since they last saw one another, and when he figures out the secret she's kept from him, everything will change once again. They've managed to maintain their sobriety, but will all the changes and revelations help to heal or hurt both of them?
Okay, I admit it. I was on the fence about Alicia for the first few chapters. The secret she kept from Chase bugged me, and that's par for the course when it comes to that specific story line in romance novels. However, I understood why she believed it was necessary at the time. I liked seeing these two as more mature and focused versions of themselves. There are some supporting characters whom I wouldn't mind meeting again in any future books. Hint, hint. But for now, I am basking in all things Caught in Us. Five stars!
Release Date: 20 May 2021
Date Read: 20 May 2021
Learn more about Kacey Shea.
Purchase Caught in Us on Amazon | Apple Books | B&N | Kobo.