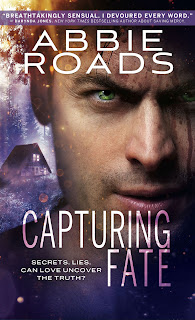 Note: A review copy was provided by the author via Xpresso Book Tours.
Capturing Fate reminds me why I was as obsessed as I was with Abbie Roads's writing a few years ago, and I'm thrilled to have had the opportunity to read her most recent work, which also happens to be the second novel in her Fatal Truth series. This is the story of an FBI agent who's pressured by his boss to see a psychologist when it appears that his renowned gut instinct may longer be as reliable as it once was, questioning if what he's been experiencing is based on reality or something else altogether. Readers meet Dolan Watts and Daughter Dawson--the FBI agent and the psychologist--and what torments one appears to be the same thing that haunts the other. They also share a once-in-a-lifetime connection, one that can't be explored just yet. But when time finally allows their paths to cross, will being together wreak havoc or could it be the thing that helps them survive?
Fast-paced and packed with suspense, action, mystery, the paranormal, and romance, Abbie Roads doesn't disappoint. I was sucked in from the get-go, and even though I made the choice to not do a re-read of the first Fatal Truth book, Saving Mercy, which I read back in 2017, I never felt lost or wondering if I was missing something. There's this constant thrum of energy throughout the book. I know that sounds weird, but it was as if I was always at the edge of my seat, eagerly anticipating what was going to happen next and how everything would play out. I don't want to give any details, but what I will offer up is a bit of advice: make sure to have nothing else scheduled on the day you decide to read this because if you do, you're going to end up distracted and not get to the planned activity in exchange for all things Dolan, Daughter, and Capturing Fate. It gets five stars.
Date Read: 13 May 2021
Learn more about Abbie Roads.
Purchase Capturing Fate on Amazon | Apple Books | B&N | Kobo.