Review: Maybe We Will by Melissa Foster (Silver Harbor #1) 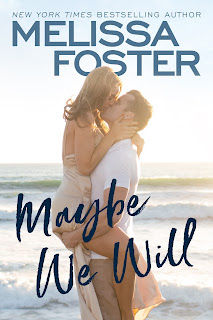 Note: An advanced reader copy (ARC) was provided by Montlake.
Someone hand me a map to Silver Island and book me a ticket on the ferry ASAP! Maybe We Will may be the first novel in Melissa Foster's new Silver Harbor series from Montlake, but readers and fans familiar with her work know that the location isn't a new place. Every single time we encounter it, it sounds so darn idyllic that I wouldn't mind spending some time there if it were an actual place. Maybe I will--see what I did there?--get to visit a place similar to it someday. For now, though, I'm more than happy to spend my time on Foster's Silver Island through her many series, and this new one in particular, which is about three sisters--Abigail de Messiéres (twenty-eight, chef, book one), Cait Weatherby (early thirties, tattoo artist, book two), Deirdra de Messiéres (thirty, lawyer, book three--I think). This new series kicks off with the youngest among the sisters, Abby.
Maybe We Will is the story of two people who are passionate when it comes to their professional dreams and find love on Silver Island when they least expect it. When twenty-eight-year-old Abigail de Messiéres travels back to her hometown to settle her late mother's affairs, she certainly didn't think she and her older sister, Dierdra, would be hit with the bombshell that their mother was forced to give up her first child years ago. Another thing she isn't wholly prepared for is the reality that bringing back The Bistro, their family's beloved restaurant, is way more difficult than she had anticipated. But her heart is set on it. That very same heart, however, wasn't ready for the impact of thirty-eight-year-old finance expert and investor Aiden Aldridge would have on it. The connection between them is instant, but is a fleeting few weeks all they can have before Aiden returns to his busy life in California and Abby wraps up her old one in New York?
I was absolutely smitten with this book! I swear, there's just something about Silver Island and the stories that Melissa Foster has been weaving with it as her backdrop that has me totally obsessed. Abby and Aiden were such a fantastic couple to get to know, with the author making sure to not skimp on the important details and points about their respective lives while also making the growth of their relationship feel organic. I found the dynamic between Abby and her sisters, Deirdra and Cait, interesting, especially given that, while they were both older than her, they also had very different personalities. I also liked seeing how Aiden was with his younger sister, Remi, and her family. Then there were the people of Silver Island, who do love their gossip but are also a strong support system for Abby and her sisters, as well as Aiden. From beginning to end, I was fully focused on nothing else by Abby, Aiden, and their beautiful romance. There's no one I'd  vote off this particular island. I want all their stories! I'm giving Maybe We Will five stars.
Release Date: 04 May 2021
Date Read: 02 May 2021
Learn more about Melissa Foster.
Purchase Maybe We Will on Amazon.