Review: Tie Me Down by Melanie Harlow (Bellamy Creek #4) 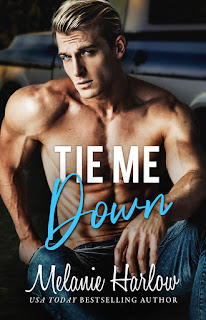 I didn't often wish for the impossible, but in that moment I found myself longing to pull Maddie onto my lap and stop time forever.

Can't this series just go on forever?! Waaah! Every single time Melanie Harlow has ended a series, that bittersweet feeling is doubled because I can't help but get attached to her characters. But I get it; all things must come to an end, and Harlow has most definitely ended her Bellamy Creek on the sweetest of high notes. Tie Me Down is the much-awaited conclusion to the series, as well as the hoped for happily-ever-after for the lone bachelor among the foursome of best friends, Griffin Dempsey (Drive Me Crazy), Cole Mitchell (Make Me Yours), Enzo Moretti (Call Me Crazy), and now, Beckett Weaver (Tie Me Down). Beckett's story is a friends-to-lovers romance, one he shares with Magdalene Blake, the girl next door who was his closest friend--aside from Griffin, Cole, and Enzo, of course--growing up, and the only girl Beckett has ever loved.
They were neighbors and the closest of friends, and while they may have shared one kiss back in high school, Beckett Weaver and Maddie Blake remained exactly--neighbors and friends--till the day they both went off to college and away from Bellamy Creek, Michigan. But a few years ago, Beckett made his way back to the farm and land his family owns, to be there for his father and to take charge of their homestead. He's exchanged his suit and tie for jeans and boots, and he's done a whole lot of growing up. Just ask Maddie, who is back in Bellamy Creek, this time around with her six-year-old son, Elliott. Now divorced, she's readying the rundown house her mother left her, hoping to sell for a fair price. Beckett offers them a place to stay, and while the friendship remains, the now-thirty-three-year-olds may finally acknowledge something that was simmering between them a decade and a half ago. But will they part ways when Maddie leaves in two weeks?
Le sigh. I adored this book! My cheeks were aching from all the smiling I was doing, and it wasn't just limited to Beckett and Maddie's romance either. Elliott was a scene-stealer. How could I not love a child who had no qualms being exactly who he was, and all the yasss to his mother for being as supportive as she was. Maddie was awesome, as was Beckett, although he seriously needed to be given the evil eye a time or two. I empathized, though, with why he felt the way he did with it came to relationships, romantic or otherwise. Then there were their circle of friends--Griffin and Blair, Cole and Cheyenne, and Enzo (yeah, I still prefer calling him that over "Moretti") and Bianca--who were nosy but well-meaning. Someone who stole my heart, however, was Beckett's dad. Beckett's and his sisters' love for their father was inspiring. If I could have chosen how to close this series out, I couldn't have chosen better than what Melanie Harlow has offered readers and fans. I'll miss these guys. Five-plus stars for Tie Me Down. Make sure to read the bonus epilogue!
-------------------------
Read my reviews for the Bellamy Creek series:

Purchase Tie Me Down on Amazon.