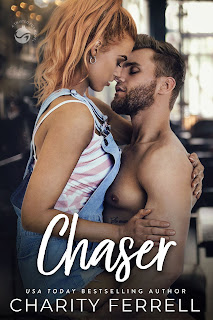 Note: An advanced reader copy (ARC) was provided by the author via Wildfire Marketing Solutions.
Charity Ferrell gives us a friends-to-lovers romance with her fourth novel in her Twisted Fox series, only this time, she adds some fake romance to it. Now, the fake romance trope has been hit-or-miss for me, but with Chaser, Ferrell succeeds in not just holding my interest but capturing my heart. If you're familiar with the series, then Grace Mitchell and Finn Duke aren't strangers. These two belong to the same close-knit circle of friends, but Grace and Finn ARE the best of friends. So, when Grace realizes that she's pregnant, she knows that she can't expect much of anything from her ex-boyfriend, especially given the fact that she had no idea he was married the entire time they were together. Instead, she turns to her friends, and when they suggest that Finn stand in as her baby's father, he agrees. This was all meant to be pretend, but is there hope for something far more real?
What's a girl to do when one of her favorite tropes happens to be matched up with one of her not-too-favorite tropes? Well, when the story is penned by an author whose work I've enjoyed in the past, then I'll readily take that story on, and in this case, I'm glad that I did. Finn and Grace's story has become my favorite in the series so far, and Charity Ferrell did not disappoint fans readers. Yes, these two were best friends, and they trusted one another immensely, but they also kept several things from each other, the most important being how they truly felt. They also had issues from their past that they needed disclose. I loved seeing them hurdle through the challenges they faced, and I enjoyed having a front row seat as their relationship evolved into something more while still keeping what made their fantastic friendship special intact. Le sigh. Chaser receives 4.5 stars out of five stars.
----------------------------
Read my reviews for the Twisted Fox series: