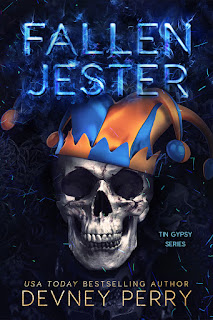 "Whether you're ready to be a father or not, this baby is yours. You belong to her like she belongs to you. The loyalty you had to your brothers, to your club, is in your blood. And it's searching for a new connection. It's screaming at you to find a new place to channel it. That place is here. With her."

Oh, my heart. My poor, battered, squeezed-out heart. With every book I've read in this series, my heart takes a beating. But damn, it's so worth it! Devney Perry's series about the lives of characters who share a connection with a motorcycle club that is no more is a standout. The idea for it is creative and original, and it almost feels like Perry's writing takes on a whole different life when it comes to these books. That's not to say that her other work isn't at par--it is. I guess what I'm trying to say is that there's an extraordinary nature that her Tin Gypsy books have, and I, for one, do not take that for granted. I'm relishing every single bit of these stories, and now that we're at the fifth one and I realize there's only one more to go, I'm already experiencing the whole bittersweet thing that comes when I know a much beloved series will be ending soon.
Fallen Jester is Leo Winters's story, and his journey to his own happily-ever-after isn't an easy one. He gets lost a few times, even after he meets twenty-four-year-old graduate student Cassandra Cline. At thirty-two, Leo's adult life has revolved around the club, the brotherhood, the garage, and the family he's created for himself. He's earned a reputation for the time he spends drinking and with women--a reputation Cassandra is quite aware of when they meet at The Betsy. Throwing caution to the wind for one night together seemed like a bad idea, but there had always been something about Leo that Cassandra wanted a part of. Six weeks--and one abduction--later, Cassandra is experiencing the repercussions of that one night with Leo. Their worlds are about to change. The question is: will Leo want to be a part of it or walk away from their daughter?
You know how some books in a series are touted as standalones that can be read independently of each other? Yeah, this is where I highly recommend that you read the Tin Gypsy series in order. While each book is about a different couple--and yes, they all get their respective happy endings--there is a continuing story line with regards to the Tin Gypsies, the legendary motorcycle club that three of the male main characters were part of, as well as the fathers of two of those three. I promise, these are books that will be well worth the time you put into reading them. The series is a spin-off of the author's Jamison Valley, but you don't necessarily need to read that prior to this. I can say that with confidence because I've yet to read the series, too. That being said, I do have almost all the JV books and am waiting to get one more before binge-reading.
Leo and Cassandra's story is one that put my emotions through its paces. There were moments of frustration,  but even then I had empathy for what they were going through. These two saw their respective lives going in very different directions before they found out they were going to be parents. Leo didn't think he was good enough--not to be a father nor be Cassandra's significant other; Cassandra had dreams of graduate school and writing a book about history, and no way had she ever seen becoming a mother at twenty-four part of those immediate future plans. Their relationship, just like any other, had growing pains, but add in the complications of the history between the Tin Gypsy MC and a rival club, and well, those became potentially deadly. But their HEA was undeniably well-earned, as are the five-plus stars I give Fallen Jester.
-------------------------