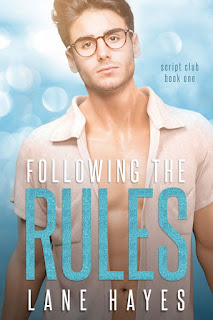 Note: An advanced reader copy (ARC) was provided by the author via IndiGo Marketing & Design.
Lane Hayes is one of those authors that happens to be an auto-read for me. Her writing never fails to bring a smile to my lips. While her earlier work had more angst and tended to be heavier--both of which you will never hear me complain about since I happen to be a self-confessed angst addict--her more recent stories over the past couple or so years have been more lighthearted fare. Her newest series, Script Club, plays up the nerd-and-jock vibe that became a theme for some of her M/M college/sports romances. It kicks off with Following the Rules, and serves as introduction to a group of geeky college students.
If you're familiar with Hayes's Starting From series, particularly Starting from Somewhere, then you may recall Topher, aka Christopher Thornton. Having said that, you don't need to read said book in order to understand this new one. Topher's got genius-level IQ, and you'd think that would give him better sense when it came to matters of the heart--and the libido--but this grad student's got one weakness: jocks. So when one of his friends asks him to help out his older brother with his undergrad degree, Topher knows he can help, but he also knows he's in trouble. Not only is twenty-seven-year-old Simon Murphy hot, but the guy's a pro football player. Sure, his career is currently in limbo, which is why he's decided to go back to college, but he is very much a jock--and a straight one at that. If they just stick to the rules, they may come out of this unscathed...or in love.
I actually thought Lane Hayes was going to release another book in her Starting From series, one about Sebastian Rourke, so I was a wee bit surprised that she was starting a new series instead. Topher had made enough of an impression as a secondary character in Cody's book, Starting from Somewhere, that I looked forward to getting to know him better in this new series starter. I think that he was matched well with Simon, and that they had that spark that I look for in new couples, one that I wanted to see grow into something more. While Hayes delivers yet another entertaining book, I did find myself wishing there was more on-page development of Topher and Simon's relationship when it came to the emotional aspect. Yes, they certainly clicked sexually and that heat was ever-present, but I was hoping the more romantic part of said burgeoning relationship garnered as much on-page attention. I love a romance with heat, but I also look for heart.
The first chapter of the book also had me scratching my head. I wasn't sure if I was missing something, so I actually had to flip back and forth through those first pages, checking if I simply didn't understand the whole concept of what Topher and his friends were were coming up with. But yeah, it took a couple of read-throughs of the first chapter for me to get that Script Club was a way for the group to make money while offering help to other students. Not sure about the name, but hey, that's just me. So, overall, Following the Rules may not have been my favorite read from this author, but it felt like a good start to a new series, and I wouldn't hesitate to read more going foreward. This gets four stars.
Date Read: 08 May 2021
Learn more about Lane Hayes.
Purchase Following the Rules on Amazon.