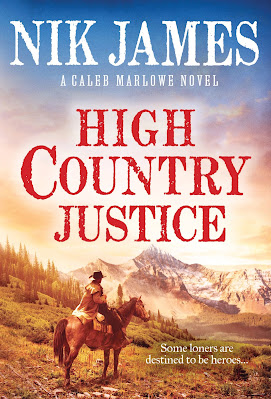 High Country Justice
(Caleb Marlowe #1)
by Nik James
Date Released: May 25, 2021
Sourcebooks Casablanca
About High Country Justice
Fans of William Johnstone will love this unique and riveting historical western series. A perfect gift for Father’s Day, birthdays, and holidays for the men in your life.
It will take all this lone frontiersman’s skills to save his only friend from murderous outlaws.
Caleb Marlowe carved out his own legend as a frontier scout and lawman before arriving in the Colorado boomtown of Elkhorn. Famous for a lightning-quick draw and nerves of steel, he is mysterious, guarded, and unpredictable. Now, he wants to leave the past behind. But the past has a way of dogging a man…
When Doc Burnett, Caleb’s only friend in town, goes missing, his daughter Sheila comes seeking Caleb’s help. Newly arrived from the East, she hotly condemns the bloody frontier justice of the rifle and the six-gun. But this is outlaw country.
Murderous road agents have Doc trapped in their mountain hideaway. To free Doc, Marlowe tracks his kidnappers through wild, uncharted territory, battling animals and bushwhackers. But when Sheila is captured by the ruthless gunhawks with a score to settle, Marlowe will have to take them down one by one, until no outlaw remains standing.

An Excerpt from High Country Justice
Elkhorn, Colorado, May 1878
Caleb Marlowe watched the embers of the fire throw flickering shadows on his new cabin walls. Outside, a muffled sound drew his attention, and Caleb focused on the door at the same time Bear lifted his great head. The thick, golden fur on the neck of the dog rose, and the low growl told Caleb that his own instincts were not wrong.
In an instant, both man and dog were on their feet.
Caleb signaled for the big, yellow animal to stay and reached for his Winchester ’73. The .44-caliber rifle was leaning, dark and deadly, against the new pine boards he’d nailed up not two hours before. If he’d had time to hang the door, whoever was out there might have gotten the drop on him.
Moving with the stealth of a cougar, Caleb crossed quickly to one side of the door and looked out, holding his gun. The broad fields gleamed like undulating waves of silver under the May moon between the wooded ridges that formed the east and west boundaries of his property. Down the slope from the cabin, by a bend in the shallow river, he could see the newly purchased cattle settled for the night. From this distance, the herd looked black as a pool of dried blood in the wide meadow.
He could see nothing amiss there. Nice and quiet. No wolves or mountain lions harrying the herd and stirring them up. The only sound was a pair of hunting owls hooting at each other in the distant pines. Still, something was wrong. His instincts were rarely off, and he had a prickling feeling on the back of his neck. He levered a cartridge into the chamber.
Caleb slipped outside into the cool, mountain air and moved silently along the wall of the nearly finished cabin. Bear moved ahead of him and disappeared into the shadow cast by the building blocking moonlight. The crisp breeze was light and coming out of the north, from the direction of Elkhorn, three miles away as the crow flies.
When Caleb peered around the corner, he was aware of the large, yellow smudge of dog standing alert at his feet. Bear was focused on the dark edge of the woods a couple hundred yards beyond Caleb’s wagon and the staked areas where the barn, corral, and Henry’s house would eventually set. Bear growled low again.
Caleb smelled them before he saw them. Six riders came out of the tall pines, moving slowly along the eastern edge of the meadow, and he felt six pairs of eyes fixed on the cabin.
He had no doubt as to their intentions. They were rustlers, and they were after his cattle. But this was his property—his and Henry’s—and that included those steers.
If they’d been smart enough to come down from Elkhorn on the southwestern road, these dolts could have forded the river far below here and had a damn good chance of making off with the herd. It must have surprised the shit out of them, seeing the cabin.
“Bad luck, fellas,” Caleb murmured, assessing the situation.
He needed to get a little closer to these snakes. Standing a couple of inches over six feet, with broad shoulders and solid muscles, he was hardly an insignificant target, even at night. His wagon was fifty yards nearer to them, but with this moon, they’d spot him and come at him before he got halfway there. It’d take a damn good shot on horseback from a hundred and fifty yards, but they could close that distance in a hurry. And Caleb would have no cover at all. Beyond the wagon, there were half a dozen stone outcroppings, but nothing else to stop a bullet.
Just then, the cattle must have smelled them too, because they started grunting and moving restlessly. That was all the distraction he needed.
Staying low, Caleb ran hard, angling his path to get the wagon between him and the rustlers as quickly as he could.
He nearly made it.
The flash from the lead rider’s rifle was accompanied by the crack of wood and an explosion of splinters above the sideboard of the wagon. A second shot thudded dead into the ground a few yards to Caleb’s right. Immediately, with shouts and guns blazing, they were all coming hard. 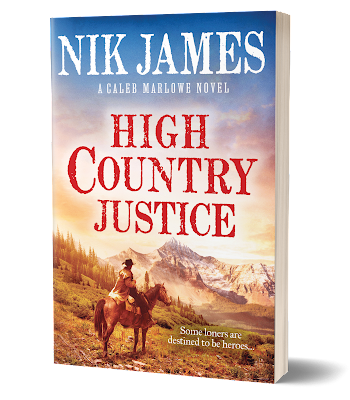 Nik James is a pseudonym for award-winning, USA Today bestselling authors Nikoo and Jim McGoldrick. They are the writing team behind over four dozen conflict-filled historical and contemporary novels and two works of nonfiction under various pseudonyms. They make their home in California.
Connect with Nik James
Website | Facebook | Twitter | Instagram | Goodreads