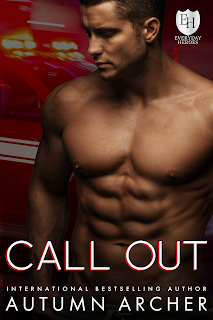 Note: An advanced reader copy (ARC) was provided by the publisher via Grey's Promotions.
Autumn Archer is a new-to-me author and Call Out is my introduction to her writing. This book is also her contribution to the multi-authored Everyday Heroes World series and is inspired by the K. Bromberg series. This is the story of a paramedic and the manager of a nursing home who find love when they least expect it. Our paramedic is twenty-eight-year-old Danny Rocco, and the woman who captures his heart is twenty-one-year-old Vivian Swann. He's exactly the kind of guy that Viv's Nonna warned her about--the ones that she should stay away from. However, there's something about the motorcycle-riding first responder that tempts her to take a risk or two...on him and maybe even a life she never fully envisioned for herself. But will Viv still want anything to do with him when she discovers Danny's secret, and can they survive the aftermath of what happens next?
I love getting the opportunity to revisit Sunnyville, California, and Autumn Archer has penned an entertaining story with two main characters who had different personalities but seemed to be exactly what the other needed most. Danny was truly my favorite thing about this book. He was this intriguing mix of someone who was determined and confident yet had moments of insecurity and frustration. He tried to keep his focus on the present and the future, but his past simply refused to let go of him. Then there was Viv, and well, I wasn't a fan of hers for the first half of the book. Her naivete went from cute to irritating. It was like having someone who was in their early twenties think and act like someone a couple of generations older. The suspense element trumped the romance, in my opinion, but Call Out remained a satisfactory read, all things considered. Four stars.
Release Date: 20 May 2021
Date Read: 20 May 2021
Learn more about Autumn Archer.
Purchase Call Out on Amazon.