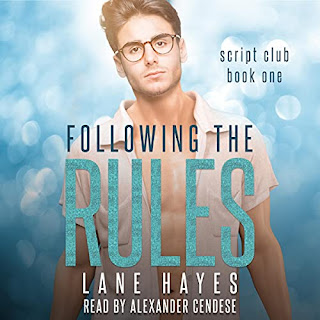 Note: The audiobook was provided by the author via IndiGo Marketing & Design.
Following the Rules is the first audiobook in the new Script Club series from Lane Hayes, and she's got one of my favorite narrators, Alexander Cendese, bringing it to life. This is an openly gay geek grad student and a seemingly straight but could very possibly be bisexual pro football player on the mend falling for each other. Topher Thornton has a bad habit of falling for jocks who use him to satisfy their bi curiosity, and he's simply done with it. So naturally, when his friend suggests it would be a good idea for Topher to tutor said friend's older brother, saying "no" would have been the best thing to do. After all,. Simon Murphy has always been hot, but now, he's also a professional athlete and could very well not be as straight as everyone thought he was. Falling for each other would be a mistake, but maybe if they truly gave this a chance, it could be the start of something amazing.
While this may not have been my favorite story from Lane Hayes, it was still one that provided a fair amount of enjoyment. I was just missing the amount of romance that I've come to expect from this author. That aside, I did like getting to know Topher and Simon and their journey towards their happily-ever-after was fairly lighthearted and one that ultimately did leave me smiling and satisfied. With Alexander Cendese's narration, the whole experience was brought up a few notches. There's something about his narration style that makes me feel as if I truly am listening to the main characters sharing the story of how they met again and fell in love. Following the Rules was a good start to this new series, and I look forward to listening to even more. I'm giving the story four stars out of five stars, and the narration nabs five stars out of five stars, averaging to a total of 4.5 stars.
Date Listened to: 22 May 2021
Learn more about Lane Hayes.
Learn more about Alexander Cendese.
Purchase Follow the Rules on Audible.