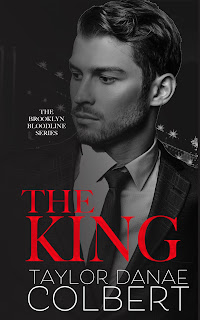 Note: An advanced reader copy (ARC) was provided by the author via Wildfire Marketing Solutions.
The King is the second book in Taylor Danae Colbert's Brooklyn Bloodline series, and this is Dominic Castiano and Scarlett Melucci's story. There was once a time where Dominic and Scarlett were young and in love. Unfortunately, the reality of their circumstances was too much for them, leaving Scarlett to make a decision that would break both their hearts--she walked away from him. A decade later and a lot has changed. Dom is now in charge of his family's outfit, but danger doesn't surround just him alone. Scarlett's own life is at risk, and in order to keep her safe, Dom takes her to his home. With them in such close proximity to each other after all these years, will they finally allow themselves to rebuild what they once had or will the danger that's coming after them steal their second chance at having the future they once dreamed of and can have again?
This was a good read, although, I confess that it fell a tad short of the bar set by the series starter, The Rook. I liked Dom and Scarlett, and I'm a sucker for a fascinating second-chance romance. Throw in the bit of mystery and suspense, and some great writing on the part of Taylor Danae Colbert. Readers get to see the Dom and Scarlett of the present alongside flashbacks that highlight just how devoted these two were to one another and how everything fell apart. Even with all the changes those ten years apart brought, the one thing that never changed was how much they loved each other. I loved the romance, and the suspense was a fair amount, enough that I enjoyed it. Colbert has become an author I can rely on! I'm giving The King four stars.
--------------------------
Read my reviews for the Brooklyn Bloodline series: