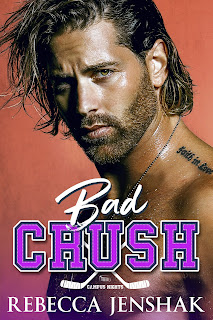 Note: An advanced reader copy (ARC) was provided by the author via Grey's Promotions.
Two books in, and this series continues to be such a treat! Bad Crush is the second novel in Rebecca Jenshak's Campus Nights series, and while the main characters are introduced in the series starter, Secret Puck, this new book stands quite well on its own. This is Reagan (for the life of me, I can't recall if her last name was mentioned or not) and Adam Scott's story. Reagan has had a mad crush on Adam since they became neighbors. This drama major is rather shy but once she's on stage, she owns the spotlight. So when serial monogomist and hockey captain Adam asks her to be his fake date for an important mixer with his professors, her acting chops should help see her through, even if her feelings for him aren't all that fake in the first place. But when Reagan goes from fake date to fake fiancée, will everything remain pretend or could it become something real?
Rebecca Jenshak's made it two for two with her Campus Nights series, what with Secret Puck setting the bar high, and Bad Crush handily meeting it. Anyone who's had a major crush on another person and never had the courage to fess up can relate to Reagan, who was an absolute joy of a female main character to get to know. When details regarding her parents came to light, I seriously wanted to give her a hug. I think she was the perfect match for someone like Adam. It may have taken him quite some time to open his eyes and his heart to the woman before him, but hey, better late than never. He had his own issues when it came to his parents--which was also touched upon in the first book since that has his sister, Ginny, as the female MC--and Rea was a great support system for him as well. Expectations are high for book three, all thanks to a great five-starred book two.
-------------------------
Read my reviews for the Campus Nights series: