Book Spotlight: A Wolf in Duke's Clothing by Susanna Allen 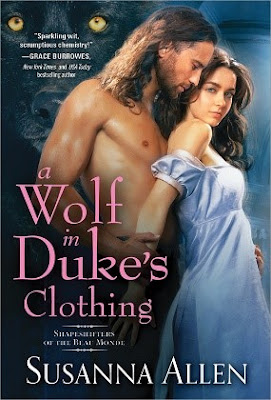 A Wolf in Duke's Clothing
(Shapeshifters of the Beau Monde #1)
by Susanna Allen
Release Date: April 27, 2021
Sourcebooks Casablanca
About A Wolf in Duke's Clothing
“Sparkling wit, scrumptious chemistry!”
—Grace Burrowes
New York Times and USA Today bestselling author
A Duke in want of a wife…
Alfred Blakesley, Duke of Lowell, has long been an enigma. No one dares to give a man of his status the cut direct, but there’s simply something not quite right about him. What would the society ladies say if they learned the truth—that the Duke of Lowell is a wolf shifter and the leader of a pack facing extinction if he doesn’t find his true love? So now he’s on the hunt…for a wife.
Felicity Templeton has a goal of her own: to remain unwed until her twenty-fifth birthday, when she will inherit a significant fortune. But that all changes when she meets Alfred, the dashing duke who’s determined to have her for his very own…

About Susanna Allen
Born in New Jersey, Susanna Allen moved to Ireland for twelve months — in 1998. Susan is living her life by the three Rs: reading, writing, and horseback riding, and can generally be found on her sofa with her e-reader; gazing out a window and thinking about made-up people; or cantering around in circles. She loves every minute of it!
Connect with Susanna
Website | Twitter | Instagram | Goodreads