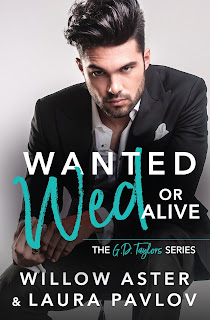 Note: An advanced reader copy (ARC) was provided by the authors.
My previous reads from Willow Aster and Laura Pavlov have been rather angsty reads, which the angst addict in me thanks them both for, so when I learned they were going to co-write a series, I thought readers would be getting an angst fest. Well, color me surprised and happily so, because I couldn't have been more wrong! The two have come up with the G.D. Taylors series and it's a romantic comedy series to boot! It's about a set of siblings, i.e. the Taylors (Spence, Caden, Gus, Jesse, and Penelope), and book one is about the youngest brother, twenty-five-year-old Jesse. He's paired with a soon-to-be twenty-six-year-old named Mya Whitfield, and these two and their story splendidly entertained me.
Wanted Wed or Alive introduces readers to the Taylor siblings, and first up is the family's runaway groom. Yeah, jilting your bride on the day of your wedding is bad form, but Jesse Taylor knew walking down the aisle was a bad idea, so run away from it was necessary. So, he leaves behind his hometown of Chicago and heads to New York where his brothers and the business they've created together are at. The last thing he needs right now is to become romantically involved. But the building's newest tenant is a temptation he can resist for only so long. Mya Whitfield is nothing like his ex, and when she gives him a chance to woo her, he can only hope to prove himself worthy of her trust.
As far as series starters go, Willow Aster and Laura Pavlov have a winner here. Not only do we get the winsome romance between Jesse and Mya, but we're also introduced to the Taylors, as well as some notable supporting characters, particularly Mya's best friend, Emma. Aster and Pavlov made it easy to fall in love with the main characters and the rest of Taylors, sparking my curiosity with what was happening between Spence and Emma (totally calling the second book as an enemies-to-lovers story for these two!), and hoping the rest of the siblings get their happily-ever-afters via stories as enticing and endearing as this. Wanted Wed or Alive was very much an opening salvo I deem worthy of 4.5 stars.
Date Read: 24 April 2021
Learn more about Willow Aster and Laura Pavlov.
Purchase Wanted Wed or Alive on Amazon.