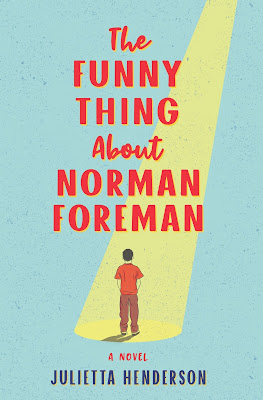 The Funny Thing About Norman Foreman
by Julietta Henderson
Date Released: April 13, 2021
MIRA Books
About The Funny Thing About Norman Foreman
Little Miss Sunshine meets Wonder in this delightfully charming, uplifting book club debut about a twelve-year-old would-be comedian who travels across the country to honor his dead best friend’s dream of performing in the Edinburgh Festival Fringe—the only problem being that his friend was the funny one of their duo.
Twelve-year-old would-be comedian Norman has got a lot going on, including a chronic case of psoriasis, a distinct lack of comic timing and a dead best friend. All his life it’s just been him, his single mum Sadie, and Jax, the ‘funny one’ of their comedy duo. So when Jax dies not only is Norman devastated, it’s also the end of the boys’ Five Year Plan to take their comedy act to the Edinburgh Festival Fringe when they turned fifteen.
But Norman decides to honor Jax by performing at the Fringe, on his own. And not when he’s fifteen—but rather in four weeks’ time. But there’s another, far more colossal objective on Norman’s plan that Sadie wasn’t quite ready for: Norman wants to find his father. Eager to do anything that might put a smile on her boy’s face, Sadie resolves to face up to her own messy past and track down the father who doesn’t even know Norman exists, and whose identity Sadie herself isn’t quite sure of.
Thus begins a road trip from Cornwall to Scotland, featuring a mother and son who will live in the reader’s heart for a long time to come.

An Excerpt from The Funny Thing About Norman Foreman
1
SADIE
When I was born my insides lay outside my body for twenty-one days. Which is unexpected but not nearly as unusual as you might think. For every 3,999 other babies that come out with everything tucked in neatly and sealed away exactly where it should be, there’s one like me. Nobody really knows why. Luck of the draw, my father used to say.
For those three weeks while I lay spread-eagled in an incubator like a Nando’s special, a crowd of doctors gathered every morning to discuss their cleverness and, as my organs shrank to their correct size, bit by bit they gently posted a little more of the me-parts that had made a break for it back inside.
Well that’s the way my mother told it anyway. The way my father told it, the doctors gathered around the incubator every morning to discuss whether they’d be having my large intestine or my liver for their lunch, and whether it’d be with chips or salad. And that right there might tell you almost everything you need to know about my parents.
On my insides’ final day of freedom the head surgeon pushed the last bit through the slit in my stomach and stitched it closed, presumably with everything in its rightful place. I was declared whole and sent home to begin life like almost nothing had ever happened.
Except that even when the regular hospital check-ups stopped, and the scar on my stomach that I’d never lived without faded to a thin silver seam, I can always remember still feeling the tugging behind it. Something I could never quite name, nudging at the fleshy edges whenever things were going badly, or too well. Or just for fun. To remind me how easily those parts of me that never really fit could come sliding out. Any time we like Sadie. Any time we like.
It wasn’t until I held my own son for the first time that the constant, dull pressure of keeping the scar together receded. When a nurse placed that slippery, crumpled up bundle of boy on my chest, I tightened my grip on a handful of hospital sheet as my world creaked on its axis, bumped into a comfy spot and was finally facing the right way.
I didn’t feel the tug on the scar again until a different boy died, and to say I wasn’t ready for it isn’t even the most important thing. Because by then there was a lot more at stake than just my own stupid insides spilling out into the world. I was as scared as hell and I had no idea how to fix any of it. And that right there might tell you almost everything you need to know about me.
Excerpted from The Funny Thing About Norman Foreman
@ 2021 by Julietta Henderson, used with permission by MIRA Books.

Julietta Henderson is a full-time writer and comedy fan who splits her time between her home country of Australia and the UK. The Funny Thing About Norman Foreman is Julietta’s first novel.
Connect with Julietta
Website | Twitter | Instagram | Goodreads