Review: Falling Out of Hate with You by Lauren Rowe (Hate-Love #1) 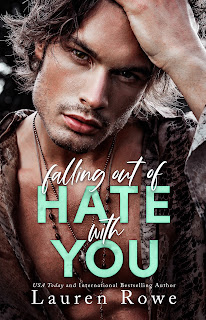 Note: An advanced reader copy (ARC) was provided by the author via Candi Kane PR.
Falling Out of Hate with You is the first book in the Hate-Love duet by Lauren Rowe AND it's a spin-off of her Reed Rivers trilogy. Having said that, you don't necessarily need to read the aforementioned trilogy in order to fully appreciate or comprehend this new book. On that note, I do highly recommend readers check out Reed Rivers's books anyway because his romance with Georgina had me addicted, eager for the release of each novel.
Being Fugitive Summer's front act is a big deal for Laila Fitzgerald, but being stuck with the band's frontman for three months could be torturous for a variety of reasons. Adrian Savage is enigmatic and mercurial, and if he could wish Laila away, he would. It's as if he hates her; and well, Laila hates Savage right back. So what if he's every bit the hot rock god the world thinks he is? Resistance is imperative...but could it also prove to be futile?
Savage and Laila are the perfect poster children for why they say there's a thin line between love and hate. These two had a thing for each other from the get-go, but denial is one of the biggest impediments in any romance, and neither of them was readily prepared for a game of chicken. Hate sex, however, well, they could do that, and there was a lot of heat and chemistry between them. Falling Out of Hate with You gets 4.5 stars.
Release Date: 15 April 2021
Date Read: 13 April 2021
Learn more about Lauren Rowe.
Purchase Falling Out of Hate with You on Amazon.