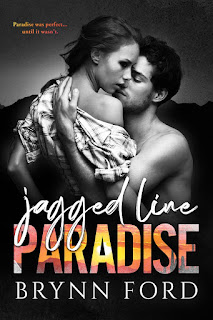 Note: An advanced reader copy (ARC) was provided by the author via Candi Kane PR.
Brynn Ford is a new-to-me author and her newest novel gave my heart a workout. Jagged Line Paradise had a story and characters that I didn't see coming. I may have given the blurb a cursory glance before signing up for the release blitz, but that didn't prepare me for what was waiting for me between the proverbial covers. I was expecting an intriguing second-chance romance; and while I did get that, there was so much more to the story of Avalon Briar and Andrés Hernandez and how their personal paradise became hell on earth, leading one to walk away and the other to stay to fight a battle with no clear victor.
Avalon Briar and Andrés Hernandez may not have had a lot growing up, but they had each other. Their friendship was the most important thing in their lives, so Andrés hoping for more was risky. Losing Avalon's friendship was something he certainly didn't want, but when the time came for him to take a chance, it was everything he had dreamed of. Until it all went horribly wrong, and in its aftermath was a nightmare that both Andrés and Avalon were forced to deal with. He leaves; she stays. And then ten years later, he returns. What happened a decade ago cost these two a great deal, and there's no going back to who they were back then. But will they be able to move forward if doing so would mean delving into and confronting the dark, evil past that haunts them?
Brynn Ford's author biography tells you that she writes "dark and dirty romance for daring readers," and she delivers on the dark and dirty, and my advice would be for new readers to take that dare and read this book. It's not necessarily an easy read, not with everything the main characters go through. Avalon and Andrés handle that life-changing event in very different ways, and while there were moments where I was frustrated with Andrés, I could empathize with why he felt his actions were necessary. They may have been on separate journeys for ten years, but true and absolute healing required them to be together, even if there were numerous challenges before them. Fair warning: there are certain violent scenes in the book that could prove to be triggering, but I felt they were necessary ones for the author to present so as to allow readers to have a better appreciation for all that followed ten years later.  Jagged Line Paradise receives 4.5 stars.
Release Date: 15 April 2021
Date Read: 14 April 2021
Learn more about Brynn Ford.
Purchase Jagged Line Paradise on Amazon | Apple Books | B&N | Kobo.