Review: Unleashed by the Moon by L.P. Dover (Royal Shifters #4) 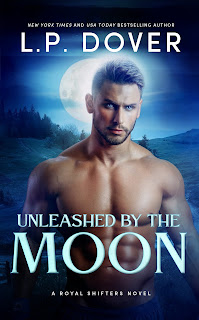 Note: An advanced reader copy (ARC) was provided by the author via Enticing Journey Book Promotions.
L.P. Dover's newest release is the fourth novel in her Royal Shifters series, and I must confess that I was really rather excited over it being published. The wait between books two and three was over five years, so having the wait between books three and four be just about two and a half months makes me a happy camper. Unleashed by the Moon is that book, and it's the story of Faith Storm and Tate Grayson. At twenty-six, she's the lone female royal arctic left to be mated, and countless shifters are gearing up to try and stake their claim. Being mated to a royal shifter would mean that they would become part of the Royal pack, opening them up to power unlike anything they've ever known. Unfortunately for all of them, Faith is determined to find her true mat, and her journey leads her to Tate, alpha of the Great Plains pack. But no one can know, not if it could cost Tate his life. Will they make it to the next full moon or will betrayal bring it all to an end?
I love the fact that this series seems to keep raising the bar with each new release, and that's saying something given that the four that L.P. Dover has published and that I've had the privilege of reading are all fantastic reads. I seriously enjoyed Faith and Tate's story. They may have been fated mates, but that doesn't mean that there won't be any hurdles for them to get through. With Faith being who she is, and with Tate being the shifter who was her true mate, these two were like living targets, the former for what a bond with her could mean and the latter because he was the only one she wanted to be bonded to. There was quite a bit of action and suspense here, ramping up that level of excitement and anticipation. The romance, of course, remains at the very heart of the story, and Faith and Tate truly were meant to be. Five stars for Unleashed by the Moon. Bring on book five!
--------------------------
Read my reviews for the Royal Shifters series: