Review: Guarding Shadows by Aly Stiles & Hazel James (Save Me #5) 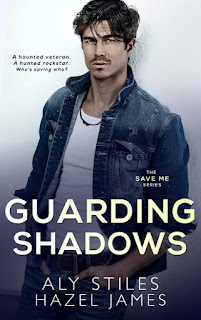 "I was so scared shitless when I couldn't find you. And when I did... it physically hurt to see you like that."

"And yet you still sat in the darkness with me."

"I'd rather sit with you in your darkness than be alone in the light."

When I learned that the fifth novel in one of my favorite series was going to be a co-written effort, I confess that the knowledge gave me pause. Why the change and how would it affect the overall feel of the Save Me series? Welp, I needn't have worried because Aly Stiles seems to have gotten herself a writing soul mate in Hazel James. Now, I've read from both these authors, so I knew how good they were as individual storytellers, but I had no idea just how well they would mesh as a duo. And mesh they did! Guarding Shadows surpassed every single expectation I had for it, and I seriously hope that this won't be the one time Stiles and James join forces for the good of romance.
Guarding Shadows tells the story of Tanner Clarke and Quinn Wylder. He's a twenty-eight-year-old who spent a decade in the army, rising to the rank of Sergeant before being forced to go on terminal leave due to a previous injury and PTSD. She's a thirty-year-old internet sensation who goes from solo artist to the lead singer and rhythm guitarist of Detour Wylder. When Quinn decides to make a stop at the army base in Rhinestadt, Germany, her time with Tanner may have been short, but it was one that left lasting impressions on both of them. When his best friend sends him a ticket to a Detour Wylder concert, it sparks a welcome reunion that turns into an unexpected job opportunity for Tanner. Quinn has a stalker, and she needs a bodyguard. Who better than a trained former soldier? But Tanner is still dealing with shadows that continue to linger. Can he protect the woman he's falling for while protecting his own heart from being left behind?
The first four novels in the Save Me series are a hard act to follow, but this fifth one more than met the challenge. Aly Stiles and Hazel James have given readers the sort of romance that has you becoming emotionally invested in the main characters and the journey they're on. This was a coming together of the niches that these authors are possibly best known for--Stiles with rock star romance and James with military romance--and what you receive is a story that puts your heart through its paces and then some. There's even a hint of mystery and suspense courtesy of the stalker angle, but at its core, this is the kind of romance that readers and lovers of the genre deserve to have in their hands. Guarding Shadows is that good, and one that I highly recommend. Five-plus stars.
-------------------------

Read my reviews for the Save Me series: