Review: We're Made of Moments by Molly McLain (Cole Creek #1) 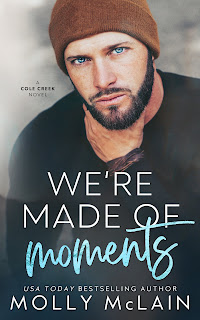 Note: An advanced reader copy (ARC) was provided by the author via Give Me Books Promotions.
I can't believe it's been about five years since I last read one of Molly McLain's books! Shame, shame, shame, I know. I'm going to need to work my way through those books of hers that I've missed; in the meantime, I'm rather happy that I was able to become reacquainted with her writing by way of the first book in her brand-new series (squee!), Cole Creek. This is a small-town romance set in a fictional Wisconsin town (although a quick cursory Google search shows that a body of water named Cole Creek actually does exist in the state), with part of it having Green Bay as a backdrop as well. The series starter, We're Made of Moments, is also a single parent, second-chance romance, but here we've got both main characters being single parents to the same child, but no, they were never a couple! Have I got you all intrigued yet? Maybe this should be called a co-parenting romance with a kinda-sorta-maybe love triangle feel to it, as well. Basically, it's a fab romance!
We're Made of Moments is the story of twenty-nine-year-old Jesse Enders and twenty-six-year-old Hayden Foss, two people whose families were neighbors during summers the Fosses spent at Cole Creek, Wisconsin, but only truly became friends about seven years ago. She had a boyfriend back then, but when he broke Hayden's heart, it was Jesse who was there to give her care and comfort. It was only two weeks, and she returned to the boy who made her cry. Then she received life-altering news, but it wasn't just her life that would be forever changed. And now, it's been over four years, and they have a system in place. It works. It has to. Her plan may have needed adjustments, but everything is as it should be. Everyone gets along, and life's greatest gift to them is happy and loved. But will these snippets ever be enough for them, and for how long?
There was A LOT to love about this series starter! Not only do readers get to fall in love with Jesse, Hayden, and Jett's story, but it's difficult not to fall in love with Jesse's and Hayden's families and the town of Cole Creek. Jesse was...goodness, I wish I could find a word that could perfectly describe him. He was such an awesome individual--as a father and a son, as well as a brother, friend, business owner, and partner, the guy
was just wow. He wasn't perfect, but he was imperfectly perfect, especially for someone like Hayden. Now, as far as she was concerned, there was no denying she was a wonderful mother to Jett. I do think she could have worked on her communication skills, particularly with the men in her life. Still, I liked who she was and I loved seeing how far she'd come by the end. Admittedly, I felt sorry for Lane. Yes, he displayed some unappealing traits when his jealousy and insecurity got in the way, but he did love her and Jett, and I think everything just blew up in their faces. Fingers crossed the rest of the series is as great as We're Made of Moments! 4.5 stars.
Release Date: 09 April 2021
Date Read: 09 April 2021
Learn more about Molly McLain.
Purchase We're Made of Moments on Amazon | Apple Books | B&N | Kobo.