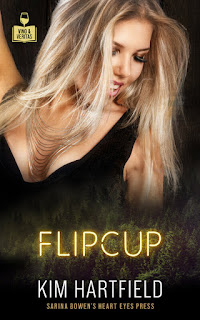 Note: An advanced reader copy (ARC) was provided by Heart Eyes Press.
We've got the first book in the Women of Vino & Veritas collection in the Vino & Veritas series! Flipcup is an F/F romance penned by Kim Hartfield, and it's the story of a woman who decides to take a break from men and ends up going through a bisexual awakening when she befriends a bartender at Vino and Veritas. Chelsea is twenty-two and has earned herself a reputation amongst friends for hopping from bed to bed whenever a guy strikes her fancy. She insists that she isn't in it just for the sex, that she hopes that it could lead to a happily-ever-after sort of thing. But after yet another unsatisfying encounter, she swears off guys and decides to stay man-free for a year, something her friends have a good laugh over. Chelsea, however, is determined to prove them wrong. When she meets twenty-six-year-old Tara while making her usual beer delivery at Vino and Veritas, Chelsea doesn't quite know how to react to the bartender's flirting. Soon, the two become friends, but something more lingers between them. After all, Chelsea never swore off women...
Kim Hartfield is a new-to-me author, and the premise for her contribution to Sarina Bowen's World of True North book universe definitely intrigued. I've read my fair share of F/F romances, and some I've happily fallen in love with, while others left me wanting. Chelsea and Tara's story was, sadly, more of the latter. Don't get me wrong; Hartfield's writing was admirably good, and there was promise there. I just didn't quite feel the connection between Chelsea and Tara, and when it comes to romance reads, it's that connection between the main characters that's one of the primary necessities. Their life experiences are different, and Chelsea's naivete is made glaringly obvious at times, particularly when she makes comments repeatedly about considering being with a lesbian an "experiment". Sigh. And poor Tara? Well, she deserved better. Now, my feelings towards Chelsea did improve much later on in the book, but again, there was just something essential missing. I wish I loved this more than I did; still, it was a pretty good read. Flipcup receives 3.5 stars.
Release Date: 05 April 2021
Date Read: 03 April 2021
Learn more about Kim Hartfield.
Purchase Flipcup on Amazon.