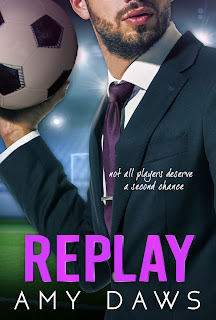 Note: An advanced reader copy (ARC) was provided by the author.
Amy Daws' Harris Brothers book universe is like the gift that keeps on giving, and the latest goody that Daws has pulled out of her seemingly bottomless (goody) bag is a new spin-off featuring the sibling's-worst-enemy trope. Wait, what?! Yes, you read that right, although I wouldn't really classify the male main character as being the female main character's older brother's worst enemy. (Did you catch all that?) Let's just say that said brother would rather have his sister be with anyone but the guy who's hoping for a second chance with the girl, but the girl wishes they could just forget their entangled past.
Replay is the story of Santino Rossi and Tilly Logan. He's the thirty-six-year-old staff lawyer for football club Bethnal Green--the same club where Vaughn Harris, patriarch of the Harris family, is the team manager--a position he's had for nearly a decade. She's the thirty-two-year-old sister of retired footballer Maclay Logan and currently back in London to help Mac and his wife, Freya, with anything they need as they prepare for the birth of their first child. Santino and Tilly were in a casual non-relationship five years ago until it all abruptly ended. Now, she's back, and this version of Tilly wants nothing to do with Santino. She tells him she's changed; what she doesn't know is that he's changed, too.
This book gave my heart a workout! Santino and Tilly may have had history as a non-couple--which basically means they were kinda-sorta-maybe together but without the commitment element--but it was parts of their personal histories that proved to be the most heartrending. My heart went out to these two, and knowing what they went through allowed me to have a greater understanding of how they became the people that they were. There are appearances, of course, from past couples, which is always a fun thing, but this book truly was all about Santino and Tilly, aka Sonny and Trouble. I'm giving Replay five stars out of five stars. Now, the countdown begins for the next novel in the Harris Brothers book world, and it can't come soon enough because that ending was gah!
Date Read: 10 April 2021
Learn more about Amy Daws.
Purchase Replay on Amazon.