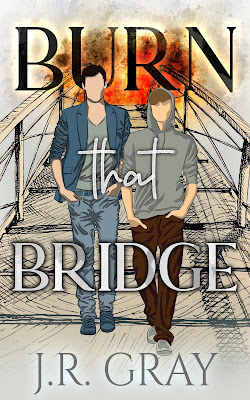 Burn that Bridge
by J.R. Gray
Release Date: April 29, 2021
About Burn that Bridge
Turns out trading a spot on the cheerleading squad for a fresh fade and all-new pronouns was more of a recipe for disaster than happiness. Coming out as trans in rural Alabama, where football rules and cheer is life, might have been the worst way to start my senior year.
There are no safety nets for people like me in places like this.
But sometimes, hope shows itself in the most unexpected places. New friends help us survive —and maybe— thrive. But falling for Sebastian was not part of the plan.
Embracing my identity put my happiness at odds with my safety. I’m terrified. Terrified to be me. Terrified to be happy. Terrified to love him.
Welcome to senior year.
Try to make it out alive. 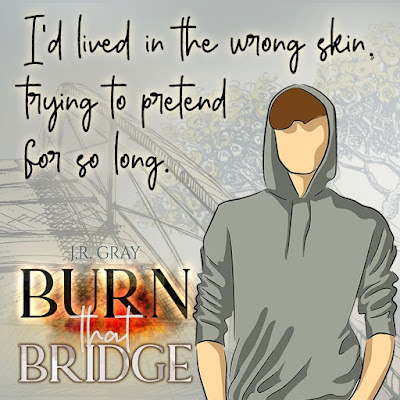 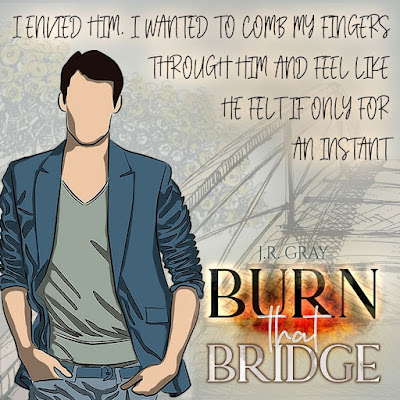 An Excerpt from Burn that Bridge
There was a light to this boy I’d never experienced before. His soul was brightness. I envied him. I wanted to comb my fingers through him and feel like he felt if only for an instant.
He drummed on his thigh, lost in his Fall Out Boy, which was such a strange band for him to be into. They were like thirty-five, but he owned it. He’d put all their albums on shuffle. Some stuff I knew, and others were made before I was old enough to care about music, and his dedication showed. He started to belt out every song in a slightly off-key tune that endeared him in my heart.
“How many people see this side of you?”
He looked over at me, his cheeks turning a little pink. “Just Emery, and now you.” He shrugged it off like it wasn’t that big a deal, but in the world I’d fallen from, it was. “My group of friends doesn’t care about cool.”
“Everyone cares in the group I was in.”
“It shows.”
I couldn’t make eye contact. “You mean since none of them will talk to me anymore?”
“Why do they care what you look like? You’re still the same person, right?”
“It’s more than that.”
“Is it?”
I turned back towards him, waiting for an explanation.
“You changed the outside and a name. And you didn’t really change it that much. You decided to go by your initials. If that’s all it takes to scare people off, they are the problem.”
“It’s not that simple.”
“I think it is. You were…” He trailed off.
“I was?” I prompted.
He shook his head. “Just rambling. It should be, and is, that simple.”
“I was lying to them. I deceived every single person for the last year.” This was so much heavier than I wanted the night to be. I didn’t want everything to be colored by my transition. I wanted to be as light as Sebastian felt.
“I think we all have parts of us we aren’t ready to share with the rest of the world. That doesn’t make you a liar.” He rolled to his side to face me.
“This isn’t a little thing.”
“I think you’re making excuses for shitty behavior.”
I couldn’t look at him again, but I could feel his eyes, unwavering. “They don’t know any better.”
“It’s time to learn.” He skimmed his fingers over my forearm, and there were real damn sparks in the wake of his touch.
I put my hand over the place he’d been like I could hold the feeling there, preserve it in some way.
He was my rainbow. A prism projecting color into this dreary existence. The little bit of light shining through the rain, and maybe that was all I needed to go on. 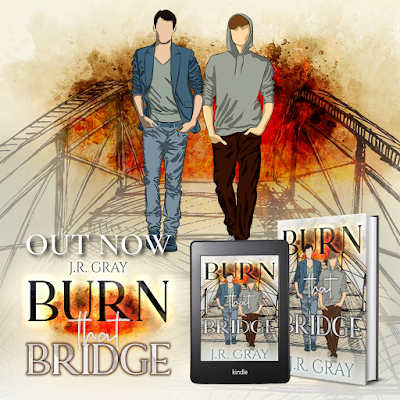 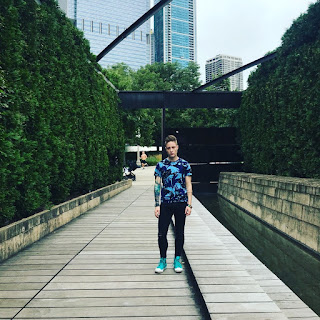 J.R. Gray is a cynical Chicago native, who drinks coffee all day, barely sleeps, and is a little too fashion obsessed. He writes realistic and damaged characters because everyone deserves a happily ever after.
Connect with J.R. Gray
Website | Facebook | Twitter | Instagram | Pinterest | Tumblr | Patreon | Goodreads 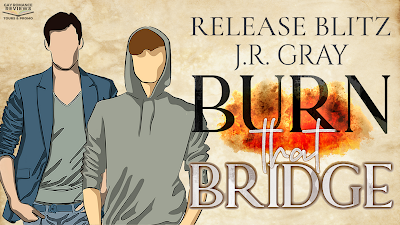