Review: My Almost Ex by Piper Rayne (The Greene Family #2) 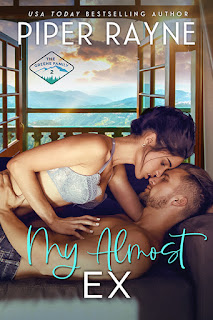 Note: An advanced reader copy (ARC) was provided by the authors via Wildfire Marketing Solutions.
After the jaw-dropping ending in the previous Greene Family novel, My Beautiful Neighbor, I began counting the days until I could get my greedy hands on My Almost Ex. This is Adam Greene's story, Adam being the second to the youngest child of Hank and the late Laurie Greene. From his thirteenth birthday onwards, Lucy Davis was Adam's world. They became husband and wife at nineteen, madly in love and devoted to each other. But a year ago, Lucy left Adam, telling him that she was no longer happy and wanted to live her life free of him and their marriage. It took him what felt like forever to mend his broken heart, but now, he's slowly started to move on. And then Lucy suddenly stands before him, acting like nothing has changed. That's because as far as she's concerned, she and Adam are still happily together. She doesn't remember leaving him or what caused her to do so--because she has amnesia. Now, Adam has promised to help Lucy regain whatever memories she can, but that doesn't include regaining the right to call him hers.
I adored Adam and Lucy's story, making it my current favorite among the three Greene Family stories that have been published so far. Theirs isn't my first romance involving one of the main characters suffering with amnesia, so I appreciated that Piper Rayne decided to add their own spin to it, i.e. Lucy having left Adam the year prior. There's the whole mystery as to why she left him in the first place, plus the realization that this Lucy that's returned to Sunrise Bay, Alaska is notably different from the one that left. I liked that Adam was as wary as he was because it felt more authentic, especially given the manner in which their marriage came to an abrupt end. It was interesting to see how the Greenes reacted to Lucy's return and their interactions with her as she struggled to remember details of her life with Adam, which simply reinforced that this family truly is a supportive and accepting one. This was a book that had its lighthearted moments, as well as more angsty times, and I enjoyed every bit of it. I'm giving My Almost Ex five stars.
-------------------------
Read my reviews for the Greene Family series: