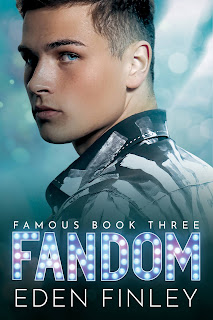 "I don't want to break your heart."

He doesn't want to. That doesn't mean he won't.

Fandom is the third novel in the Famous series, and this has been one of my most anticipated reads for this year. But then, anything Eden Finley has lined up on her publication schedule lands on that list of mine. This features Denver Smith and Mason Nash, both former members of Eleven whose friendship came to an end the same night their boy band played their final concert. Denver may have been the youngest and Mason the oldest, but in the seven years that they spent recording and touring as part of Eleven, they were also the closest. That is, until one thing led to Denny walking away from Mason and ghosting him soon after. When talk of an Eleven reunion forces now twenty-five-year-old Denny and twenty-nine-year-old Mason back in each other's lives, neither one is enthused. Denny knows he needs to apologize for what happened two and a half years ago. Mason wants an explanation; can he handle the truth when Denny offers it to him?
Oh, Lordy. I had no idea this was how Denver and Mason's story would play out! So. Much. Angst. And I loved every single bit of it! GAH! That isn't to say that it was a heavy read throughout. There were countless lighthearted moments, not just between the two of them, but also with the other Eleven guys. My heart went out to both Denny and Mason because while it was clear they had missed each other, there was a great deal of wariness given everything that happened in between two and half years and eighteen months ago. Now, I'm not going to go into details because hello, spoiler-ville, but I promise, the journey these two former best friends--or maybe more of estranged best friends who were really still besties that took a two-and-a-half-year-long break--provided quite a few heartrending AND heartwarming moments. And let's not forget the swoon-worthy times because there were many of those, too. All the "le sigh." I'm giving Fandom five-plus stars.
-------------------------

Read my reviews for the Famous series: