Review: Could Have Been Us by Corinne Michaels (Willow Creek Valley #2) 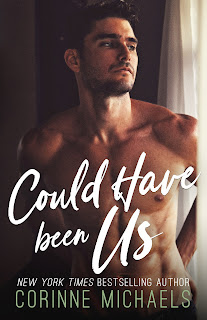 Jack isn't my forever. He was my once.

Heartrending yet hopeful. This book nearly squeezed the heck out of my heart, but by the end, it also made it feel so darn full, like close to bursting. Could Have Been Us is the second novel in Corinne Michaels's Willow Creek Valley series, and it's got a bit of falling-for-your-best-friend's-sibling romance to it alongside the second-chance romance feels, with a hint of friends-to-lovers. Tropes aside, this was a beautifully penned story of two people who set aside their feelings for each other, choosing to put those who mattered a great deal to them first. My heart broke and mended time and again for Jack O'Donnell and Stella Parkerson, and while their long journey wasn't easy, it was so worth the read.
Could Have Been Us is about Jack O'Donnell and Stella Parkerson. He's thirty-four, and Grayson Parkerson has been his best friend for years. On the other hand, she's thirty, and she's stuck with four very protective brothers. At sixteen, Stella wished for nothing more than for Jack to see her as someone other than his best friend's little sister. Two years after, she got her wish, and one kiss led to a night that would change their lives forever. But that's all they could have--that one night--because they made choices that would lead them to pretend that they were nothing more than friends, if that. What happened in the past needs to stay there for everyone's sake...but sometimes, it has a way of coming back.
I'm trying really hard to self-edit because I seriously don't want to accidentally blurt something out and make this review all spoilery for anyone who has yet to read the book. And this is where I tell you: GO READ THE BOOK. You could read this as a standalone, or you could choose to read the series starter, Return to Us, before jumping into this one. Either way, the reader wins because Corinne Michaels knows how to write romance, and I feel like Jack and Stella's story ranks among her best. Aside from the two of them figuring out what to do with their relationship, this was also about family and how the ties that bind us don't always include blood. Could Have Been Us receives five-plus stars.
-------------------------
Read my reviews for the Willow Creek Valley series: