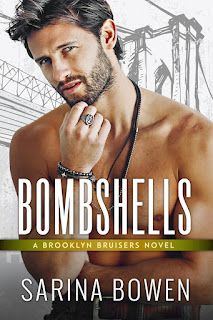 Note: An advanced reader copy (ARC) was provided by the author.
The much awaited Baby Bayer book--and the eighth standalone novel in Sarina Bowen's Brooklyn Bruisers series--is here! If you have no idea who Baby Bayer is, I feel like I need to hand you my dog's cone of shame right now. He's none other than Anton Bayer, defenseman for the Brooklyn Bruisers and cousin of Eric Bayer (Moonlighter, book one of The Company), and Bombshells is his book. Curious about the title? Well, that's because Anton's been paired with Sylvie Hansen, the backup goalie for the newly formed women's professional hockey team, the Brooklyn Bombshells. These two twenty-somethings not only love hockey, but are in love as well or are on the way to being so--Anton with Sylvie, and Sylvie with Bryce Campeau, Anton's teammate and friend. Complicated much? The biggest bombshell, though, could be the realization that there's more to life than hockey.
This book has been one of my most anticipated reads every since Sarina Bowen announced that it was in the works, and goodness, but did she light the lamp! I loved having a ringside seat to the journey that was Anton and Sylvie's romance. These two didn't immediately fall in love with each other--although Anton WAS rather taken by Sylvie and then summarily smitten with her--given the Bryce factor. Having said that, this is NOT a love triangle, so there is NO cheating of the sort that takes place. You'll just have to read the book to understand the role Bryce plays in Sylvie's life and in the relationship she goes on to have with Anton. Speaking of Anton, the guy was an absolute revelation. I'm not going to compare him to his cousin because they're two individuals who happen to be awesome wholly on their own (although their moments together had me grinning).
One of my favorite things about this series is how readers who are new to either the author's writing or to the series itself can jump in and be able to enjoy the story and characters and not feel lost. Another of my favorite things is that readers like me who have read the previous books get a whole new story as well as touch base with past characters and couples from Sarina Bowen's other novels, with the best part being that the book solely has its spotlight on, in this case, Anton and Sylvie. So there was a whole lot of giddiness going on for a variety of reasons while I was reading this. I appreciated that there wasn't too much drama when it came to the Bryce angle, although now I'm super curious as to what was going on with him while Anton and Sylvie were getting close and falling in love. Hmm... Five stars go to the fantabulous book that is Bombshells!
-------------------------