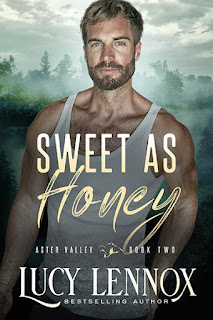 Note: An advanced reader copy (ARC) was provided by the author.
Stand by for major squeeing... SQUEEEEEEEEEE!!! This book was sweet as fuck, but then would I have expected anything less from a title like Sweet as Honey and from an author like Lucy Lennox? I absolutely adored everything this book was, and it was such an awesome follow-up to Winter Waites and Right as Raine, the prequel novella and full-length series starter, respectively. The romance is there, but we've got the added bonus of some mystery and suspense, and a number of well-meaning yet super nosy people in the neighborhood. But then, that's part of the appeal of the small town romance series that is Aster Valley, right?
Sweet as Honey is the story of Truman Sweet and Samson Rigby. Both were introduced in Right as Raine, but you don't necessarily need to read it in order to enjoy this new book (but go read it anyway because it's a fab M/M romance). Truman is twenty-four and the owner of the Honeyed Lemon, while Sam is thirty and has his own construction business back in his Texas hometown. The former thinks of himself as somewhat of a pariah, blamed for the town falling on hard times after the ski resort was closed down; the latter is best friends with Mikey Vining and is currently on vacation to get away from the drama of his mother and sisters.
After Sam rescues Truman from Patrick Stanner, resident bully and part of the Stanner family that is the bane of Truman's existence, he finds himself having to wait on repairs on his now damaged motorcycle. There's something about Truman that inspires Sam's protective instincts. When trouble seems to follow in Truman's wake, the more Sam believes someone is targeting the younger man. He wants to be Truman's friend, but he also realizes that he wants to be far more. But what can come of starting something with Truman, when at the end of it all, Sam has to return to his responsibilities to his remaining family and business back in Texas?
These two were made for each other! I loved how the connection was there from the get-go, but they also were somewhat being careful the first few interactions they had with each other. Truman was such a sweetheart, and I seriously wanted to give him a hug given that he felt as if he was an outsider in his own hometown. Then there was Sam, who also deserved a hug of his own because the man seriously put everyone else ahead of himself. I figured out who was behind all the shenanigans, and his reason behind it truly was creepy. Lucy Lennox has once again delivered a winner with Sweet as Honey, and it deservedly gets five stars.
-------------------------
Read my reviews for the Aster Valley series: