Review: The Belle and the Beard by Kate Canterbary 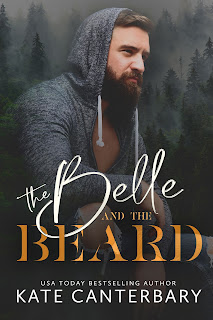 Note: An advanced reader copy (ARC) was provided by the author via Grey's Promotions.
My first read from Kate Canterbary was Boss in the Bedsheets, which was released in June of last year, and it was an office romance featuring the second of the Santillian triplets, Ash. Now, Canterbary's newest novel is about the youngest of the triplets, Linden, and while he's the "Beard" in The Belle and the Beard, the "Belle" is an actual Southern belle named Jasper-Anne Cleary. He's a thirty-six-year-old arborist who prefers to keep things casual with anyone he's with; and she's a thirty-five-year-old campaign strategist who's left behind her life in Washington D.C. to reassess while working on the cabin her surrogate aunt left her. Both are set in their ways, but they may learn a thing or two about letting go and holding on when they go from reluctant neighbors to eager lovers.
Two books in and the Santillians have captured my heart. Can you imagine what would happen when I finally read Magnolia's story?! Thank goodness I have Kindle Unlimited because I borrowed that book halfway through Linden and Jasper's story because I needed to make sure I had all three of the stories involving the Santillian triplets. They're very much involved in each other lives, but each sibling has their own story to tell, as was the case with Linden. He was someone who liked having his own space and not having someone to answer to--not including his parents and siblings, of course, since he didn't have much choice in the matter. Meeting Jasper slowly but surely changes Linden's life, even as he tries to not get attached, and boy, oh boy, was she a force to be reckoned with.
One of my favorite things about this book had to do with character development. Both main characters had their fair share of realizations, and they needed to make conscious choices to either move forward or remain stuck in neutral. Jasper needed to learn to let go of everything that was holding her back, while Linden needed to realize that holding on didn't mean opening himself up to the possibility of loss or rejection. These two had some awesome banter, and I was wholly entertained every single time they were together. Kate Canterbary meshed the lightheartedness with the angst, and it resulted in a really great read that had me flipping from one page to the next, refusing to be distracted by whatever else was going on around me. I'm giving five stars to The Belle and the Beard.
Release Date: 23 April 2021
Date Read: 20 April 2021
Learn more about Kate Canterbary.
Purchase The Belle and the Beard on Amazon.