Review: From the Embers by Aly Martinez 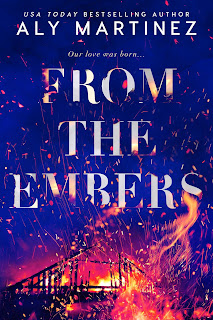 And for the first time since our world had exploded, I felt like maybe he was right.

And just like that, Aly Martinez has laid claim over yet another piece of my heart with her newest release. From the Embers is a standalone--with a cameo appearance from one of my favorite couples--and Martinez delivers one of her most enthralling romances with this story of four people, one explosion, two survivors, and no idea how to move forward. I went into this having no expectations other than the author's usual excellent writing, and yes, I went into it blind, and by the end, I was left gobsmacked by everything I'd read.
When an explosion rips through his home, Eason Maxwell picks up his barely conscious wife from the floor to take her outside. Only the woman in his arms isn't his wife, Jessica; it's her best friend--and his best friend Rob's wife--Bree Winters. In the aftermath, both Eason and Bree have lost their respective spouses, and are left with Bree's two children, Asher and Madison, and Eason's daughter, Luna. As they struggle to hold it together, they learn to rely on one another and creating their own support system. Over time, their lives would evolve and thrive, but when secrets of the past are unearthed, will Eason, Bree, and the family they've created for themselves be able to survive the possible devastation?
This was truly a journey, and one that I feel privileged to have been a witness of. Eason and Bree--and their kids!--went through the wringer, and for two thirty-somethings to have their lives upended more than once? Lesser people would have buckled under all the pressure, responsibility, grief, and guilt. But these two managed to overcome it all, becoming stronger in the process. And that's the thing I love most about this book: the character development! Oh, let's not forget the slow burn romance and the twists and turns in the story. Gah! From the Embers left me with a five-plus-starred book hangover!
Release Date: 28 April 2021
Date Read:28 April 2021
Learn more about Aly Martinez.
Purchase From the Embers on Amazon.