Review: The Bossy Prince by Lili Valente (Rugged and Royal #3) 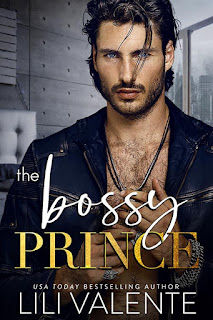 Note: An advanced reader copy (ARC) was provided by the author.
Ooh, Lili Valente brought it, and all I can say is "gimme, gimme, gimme!" She closes out her Rugged and Royal series with a royal romp with a healthy seasoning of suspense thrown in to add some spice. The Bossy Prince features the youngest royals in the Von Bergen and Rochat families--Nickolas Edward Xavier Von Bergen and Alexandra Gertrude Renee Rochat. Both twenty-five, the two aren't exactly chums, not when Zan can't stand Nick. It's not as if she can avoid him, not when her two sisters happen to be married to his two older brothers. Add to that the fact that both Zan and Nick work for Union Ten, an elite law enforcement agency. To make matters worse, he outranks her. Now, they have to work undercover as a couple in love. You'd think it would be difficult since Zan hates Nick with a passion...or could a whole new passion spark to life this time?
Ah, this was fun! I loved the tension as much as I did the witticisms between the main characters. Zan and Nick were opposites of a sort, with their being royals and spies the only thing that they seemingly had in common other than her set of siblings being married to his set of siblings. Naturally, these differences between them made for entertaining exchanges. The romance and the comedy are things I've come to expect from this author, and Lili Valente delivers both quite nicely, thank you very much. She does, however, a refreshing bit of suspense. Valente does exceptionally well melding all of her elements, making for a creative take on the royal romance trope. I loved the fact that Zan and Nick were a couple who distinguished themselves from their older siblings. Naturally, said siblings' presence added to my enjoyment of The Bossy Prince. Five stars!
-------------------------
Read my reviews for the Rugged and Royal series: