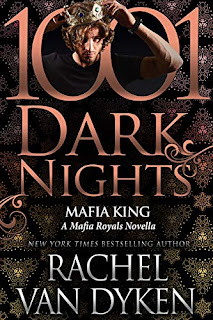 Note: An advanced reader copy (ARC) was provided by the publisher via Social Butterfly PR.
Tiny and Tank; Tank and Tiny. If ever there were two people who seriously needed a happily-ever-after, it had to be these two. And well, Rachel Van Dyken gave them exactly that, but you know that nothing comes easily when it has to do with matters of the heart with the Five Families. Tank DeLange and Kartini "Tiny" Abandonato's journey to an HEA was by no means easy nor simple. It all plays out in Mafia King, and while it may be short in terms of length, it still packs a heck of a punch. She's nearly nineteen and he's seven years older. She's a mafia princess, and he's an FBI agent working undercover. He's been tasked to protect her by her father, but she needs someone to blame for what happened a year ago. Because he wasn't there when she needed him, Tiny's got her sights set on Tank. Inevitably, he'll have to make a choice, but will either one still cost him Satan's mistress?
Tiny and Tank were as entertaining as I expected them to be. There was such a great push and pull thing going on between them. You knew they wanted each other, and maybe they had an inkling that the want was reciprocated, but their story was more about the realization that they needed one another--and that need wasn't limited to just the two of them. Tank had to make a choice, one that you would think would have been difficult, but I honestly believe he knew what he wanted from the moment he realized that a choice would have to be made. And Tiny? She was very much the epitome of the Shakespearean quote "Though she be little, she is fierce." My heart went out to her, but she truly was a warrior (mafia) princess. I loved getting to know both Tiny and Tank better in Mafia King, and seeing the rest of the younger generation of the mafia royals is always fun. 4.5 stars.
-------------------------
Read my reviews for the Mafia Royals series: