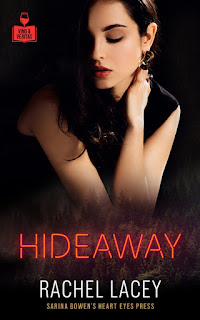 "I've only been in love twice, and both times it was with you."

Oh, my. I do believe I've found my latest favorite read in the Vino & Veritas series! I've read several of Rachel Lacey's work in the past, most of them her traditionally published contemporary romance titles, so when I heard that she was part of Sarina Bowen's World of True North book universe, particularly the V&V series, I found myself pleasantly surprised and very much intrigued. Side note: I thought this was Lacey's first foray into LGBTQ romance, but a quick search through her back list made it glaringly obvious that it wasn't AND that I've missed out on her more recent writing, something that needs to be rectified as soon as humanly possible. But I digress... Hideaway is the eighth novel in the series, and it's the second in the Women of Vino & Veritas sub-collection. Like those before it, this book reads quite well as a standalone, so if you've yet to read the previous releases or are simply new to either the author or the book universe, feel free to dive straight in.
Hideaway is a second-chance F/F romance set in Burlington, Vermont. Phoebe Shaw and Taylor Donovan become best friends as children, sharing the summers together, each time Phoebe and her family came to visit. When they were sixteen, their friendship evolved into more, with the two becoming each other's first love. But fear got the better of Phoebe, leading her to cut ties with the girl who meant to her more than anyone else ever could. Thirteen years later, Phoebe returns to Burlington, giving her beloved grandmother's cottage a makeover in preparation to sell it. Crossing paths with Taylor was inevitable, as are the feelings of guilt and longing. Being back in the place she loved as a child and teenager was supposed to be Phoebe's time away from dealing with the loss of her job and relationship in Boston; but being around Taylor and her dogs may be her shot at doing what she wished she could have done years ago: lay claim to her happily-ever-after.
I'll be honest: I'm super picky when it comes to F/F romances, even pickier than I tend to be with M/M romances. I can count on fewer than the ten fingers of my two hands F/F romances that have stayed with me, so forgive me if I'm rather giddy over the fact that I can finally--FINALLY!--add a new title to that ever-so-short list. Rachel Lacey blew me away with her writing on this one, and it wasn't just a matter of her writing any ol' romance and adding LGBTQ characters in place of heterosexual ones. This really was the story of the journey that Phoebe took as a teen who feared the perceived ramifications of being a lesbian at sixteen to a nearly thirty-year-old rediscovering a part of herself that had been missing since she last saw Taylor, the love of her life. The dogs were a definite bonus and heartwarming scene-stealers to boot. The humans were up to snuff as well. There was nothing about Hideaway that I didn't love, which is why it gets five-plus stars.
Release Date: 05 April 2021
Date Read: 03 April 2021
Learn more about Rachel Lacey.
Purchase Hideaway on Amazon.