Book Spotlight: A Cowboy of Legend by Linda Broday 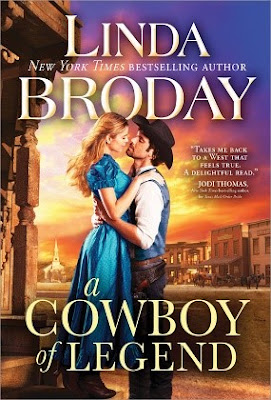 A Cowboy of Legend
(Lone Star Legends #1)
by Linda Broday
Release Date: April 27, 2021
Sourcebooks Casablanca
About A Cowboy of Legend
Famous across Texas, the Legends stand ready to take on any challenge that comes their way...
Deacon Brannock has struggled his whole life to amount to something. But when he finally saves up enough to buy the saloon that’ll put him on the map, he’s immediately challenged by the Temperance Movement. He only wants to make an honest living, but there’s no stopping the Movement’s most determined firebrand: Grace Legend.
And after one look at the fierce beauty, he’s not even sure he wants to.
Grace has always had her pet crusades, but she sees the Temperance Movement as the one thing that will bring her the deep sense of purpose she’s been missing. Yet when the owner of the new saloon turns out to be a kind and considerate man with warm eyes and a smile that leaves her breathless, she can't help but wonder whether they could have a future together...if only they could find a way to stop being enemies long enough to become so much more.

About Linda Broday
At a young age, Linda Broday discovered a love for storytelling, history, and anything pertaining to the Old West. After years of writing romance, it’s still tall rugged cowboys that spark her imagination.
A New York Times and USA Today bestselling author, Linda has won many awards, including the prestigious National Readers’ Choice Award and the Texas Gold. She resides in the Texas Panhandle where she’s inspired every day.
Connect with Linda
Website | Facebook | Twitter | Goodreads