Review: Headhunter by Kristen Proby (With Me in Seattle Mafia #2) 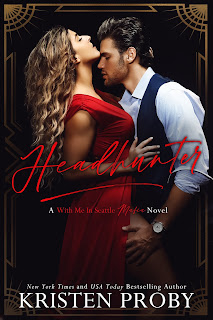 Note: An advanced reader copy (ARC) was provided by the author via Valentine PR.
I am so loving Kristen Proby's With Me in Seattle Mafia series! Two books in, and I'm even more impressed than I was when I started the series! Headhunter is the second book, and while you could read this independently of the first one, Underboss, I do recommend that you read them in order because there are certain details that carry over from one book to the other. There are also recurring characters, what with three male characters being brothers. However, you could still read this first and then the previous one if you want to.
Headhunter is the story of Shane Martinelli and Ivie Jordan. He's part of the mafia but also happens to be a secret government operative, and she works at a medi-spa owned by one of her best friend and also happens to have a secret of her own. It's that very secret that leads to Ivie's abduction. Shane and his family may have rescued her, but discovering Ivie's true identity results in more questions than answers. Shane's top priority, howewer, is to keep Ivie safe. The question is, who will keep them safe from the feelings that have been threatening to boil over for as long as they've known each other?
Shane and Ivie's story kept me on my toes from start to finish! I love that Kristen Proby kept that thrum of excitement, constant but peaking when the action picks up--and I'm not just talking about guns-blasting type of action either. Wink, wink. I already had a feeling Shane was going to be as intense as he was, but Ivie was such a revelation. She wasn't some shy wallflower who was all naivete. Seeing her come so far as the story progressed was one of my favorite things about this book. She truly came into her own, and she and Shane were so well suited to and for each other. I enjoyed the romance and action that came with this book and I'm excited for book three! Five stars for Headhunter.
-------------------------
Read my reviews for the With Me in Seattle Mafia series: