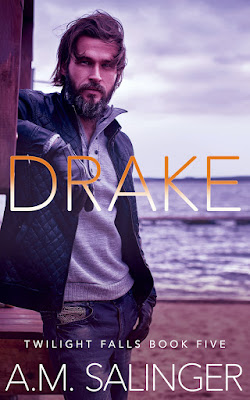 Drake
(Twilight Falls #5)
by A.M. Salinger
Release Date: April 30, 2021
About Drake
Roman Campbell. Wild Child. Rebel. Rockstar. Broken.
At the age of twenty-eight, Roman Campbell has the world at his feet. Young, successful, and brutally beautiful, his facade of an uber-cool rockstar hides deep scars that have tormented him for years. After finally putting the pieces of his broken life back together, Roman attends the wedding of his famous movie star friend Carter Wilson in Twilight Falls, where he meets Drake Jackson. Their attraction is instantaneous and Roman hooks up with the sexy builder for one intoxicating night.
Drake Jackson. Wickedly Hot. Serial Heartbreaker. Reformed (mostly) Bad Boy.
Having put behind his difficult childhood, Drake Jackson is content with his life. His one regret remains his lost chance at a relationship with his childhood friend Alex. After a torrid encounter with Roman at Carter’s wedding leaves Drake hungry for more, the builder believes he will never set eyes on the famous rockstar again. But when Roman buys the property Drake had long coveted in Twilight Falls right from under his nose and hires Drake as his contractor, Drake realizes trouble has come to find him with a capital T.
Sparks fly and the two men soon commit to a temporary arrangement that sees them satisfying their carnal desire for one another. But when Roman’s past comes crashing back into his life and his secrets are revealed, Drake finds himself experiencing a lot more than just desire for Roman. Will Drake finally accept the feelings growing inside his heart? Or will he reject Roman’s love and repeat the mistakes of his past?
Join Drake and Roman in this wildly addictive fifth installment in Twilight Falls, the new series by the author of the bestselling, contemporary, gay romance series Nights.
Content Note: This book contains sensitive content that may be upsetting to some readers. Please refer to the page at the start of the book for more information. 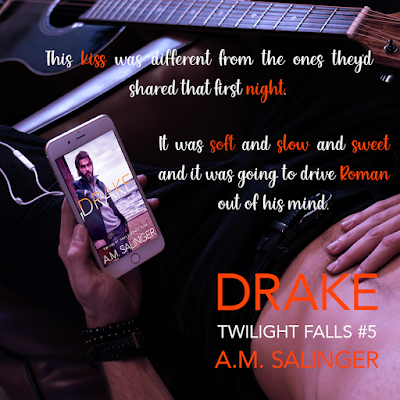 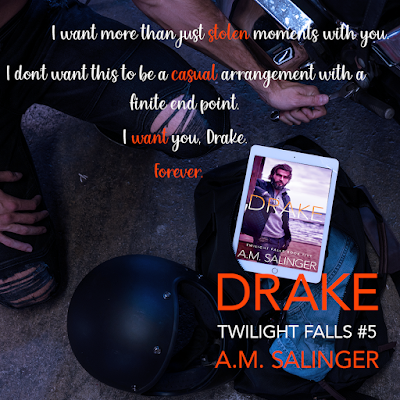 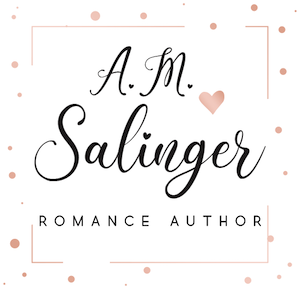 A.M. Salinger is the pen name of an Amazon bestselling author who has always wanted to write scorching hot contemporary romance and M/M urban fantasy. In 2018, she finally decided to venture to the steamy side. Nights and Twilight Falls are contemporary M/M romance series written as A.M. Salinger. In 2021, she launches Fallen Messengers, her first M/M urban fantasy series written as Ava Marie Salinger.
When she’s not dreaming up hotties to write about, you’ll find Ava creating kickass music playlists to write to, spying on the wildlife in her garden, drooling over gadgets, and eating Chinese.
Want to be the first to know about Ava’s new releases and get access to exclusive content, sneak previews, sales, and giveaways? Then sign up to her Reader Group here and join her VIP Facebook Fan Group here.
Connect with Ava
Website | Facebook | Instagram | Pinterest | Goodreads | BookBub | Amazon