Book Spotlight: The Last Bookshop in London by Madeline Martin 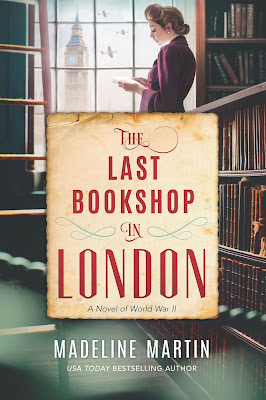 The Last Bookshop in London
by Madeline Martin
Date Released: April 6, 2021
Hanover Square Press
About The Last Bookshop in London
Inspired by the true World War II history of the only bookshop to survive the Blitz, a sweeping story of wartime loss, romance, and the enduring power of literature, perfect for fans of The Paris Wife and The Lilac Girls.
London, autumn 1940: the Blitz has only just begun when Grace Bennett arrives in London to find the city she’s spent a lifetime dreaming about now cast in the clouds of war, and all of her plans unraveling at the seams. After accepting a job at a charming bookshop nestled in the heart of the city, a haven for literary-minded locals, she feels like a fish out of water – she’s never been much of a reader, after all.
As the bombs rain down on the city night after night, a devastating air raid leaves London’s literary center in ruins, and the libraries and shops of Paternoster Row are destroyed in a firestorm. But against all odds, one bookshop miraculously survives. Through blackouts and air raids, Grace continues staffing the shop, discovering a newfound comfort in the power of words and storytelling to unite her community in ways she never imagined, a power that triumphs even the darkest nights of war-torn London.

Madeline Martin is a New York Times and USA Today bestselling author of historical romance novels filled with twists and turns, adventure, steamy romance, empowered heroines and the men who are strong enough to love them. Her books have finaled in the Holt Medallion award and National Excellence in Romance Fiction Award.
Connect with Madeline
Website | Facebook | Twitter | Instagram | Pinterest | Goodreads