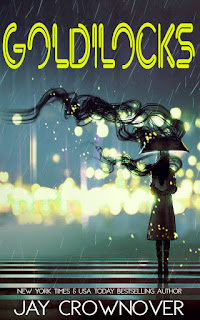 Note: An advanced reader copy (ARC) was provided by the author via InkSlinger PR.
The original incarnation of Jay Crownover's newest standalone was as a newsletter serial. Buffed and polished, Goldilocks is a new adult (NA) romance and tells the story of Olivia Adams, a girl whose heart belonged to Huck Snyder but whose choice when it counted most was Huck's half-brother, Sawyer Richman. Growing up, they all lived in the same palatial home, but Ollie was never one of "them", what with being the daughter of the help. Then there was Huck, the boy who was the result of his father's indiscretion, and a constant reminder to the man's wife of a mistake that bore fruit. Both were tolerated more than anything--although one just barely--yet they found solace and more with each other. When tragedy strikes, however, Ollie makes a heartbreaking choice--one that leads to Huck's banishment. If Ollie came running, would Huck welcome her or turn her away?
Confession time: I'm not a fan of newsletter serials, and that mostly has to do with my lack of patience, which is also why I totally get frustrated with cliffhangers. So when Jay Crownover originally released this story as a newsletter serial, I found myself hoping that she would go ahead and publish it as a complete book later on. And she did exactly that, so I'm a happy camper. Ollie (side note: I adore Olivia's nickname because it was my beloved dog's nickname, too!) and Huck's story was such a journey, and I'm glad that I was able to experience right alongside them. These two had to make choices, most of them very difficult ones, but whatever lessons life through their way, they made the most of as well and they learned to fight for what they wanted. There's romance but there's also some mystery to this, making Goldilocks even more intriguing. This garners 4.5 stars.
Date Read: 18 April 2021
Learn more about Jay Crownover.
Purchase Goldilocks on Amazon.