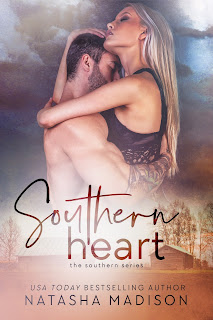 Note: An advanced reader copy (ARC) was provided by the author via Wildfire Marketing Solutions.
Southern Heart is the fifth book in Natasha Madison's Southern series, and it's the second one featuring the second generation of characters. This is Chelsea Huntington's story, one she shares with Mayson Carey. Chelsea is the daughter of Beau and Savannah, whose story plays out in Southern Storm (book three in the Southern series), while Mayson is one of Ethan McIntyre's Army buddies, Ethan being Chelsea's brother and whose own story is the fourth book in the series, Southern Sunrise. Having said all that, you could try reading this new book independently of the others, although if you're like me and you like knowing back stories and reading books in a series, you'll want to read the rest in order.
When twenty-three-year-old Chelsea Huntington returns to her hometown after graduating from nursing school, she hopes to spend some time with her family before starting work, but when badly beaten and bloodied man requires her help, she doesn't hesitate. The fact that he happens to be someone she knows spurs her on even more. Twenty-nine-year-old Mayson Carey is not only her brother's friend, but someone her family has embraced as one of their own. He's clearly been tortured and left for dead. His recovery may take some time, but Mayson vows vengeance. All he needs is more information and to keep Chelsea at a distance, but that may be far easier said than done.
This book was very much a romantic suspense read, and Natasha Madison didn't skimp on either element. I loved how strong of a female main character Chelsea was. She refused to be put in a corner and spoke her mind freely. The men in her life--her father, brother, uncle (both actual and honorary), and cousins--were very protective of her, but Mayson quite possibly had them beat. He was protective but also acknowledged that she was no simpering damsel, holding her own time and again. I adored these two together because they fit in ways that I doubt they would with anyone else. It looks like this second generation is giving the first a definite run for their money. Five stars for Southern Heart.
------------------------