Review: Underboss by Kristen Proby (With Me in Seattle Mafia #1) 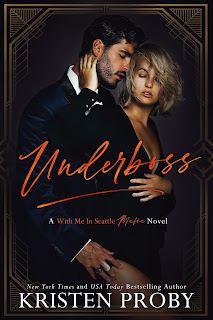 Note: An advanced reader copy (ARC) was provided by the author via Valentine PR.
Ooh, I'm loving this new series starter from Kristen Proby! Underboss is the first novel in Proby's With Me in Seattle Mafia series, which is a spin-off of her highly popular and much loved debut With Me in Seattle series. Fans and readers may recall that we got a taste of what was to come when Proby published the fourteenth With Me in Seattle full-length novel, You Belong with Me. This was the story of Elena Watkins and Archer Montgomery, and the Martinellis were introduced as well, they being Elena's cousins, and how Elena's ties were with the mafia and their entire family's hope to render their own brand of justice on those who killed Elena's parents. That story line continues in this first With Me in Seattle Mafia book, but it also evolves into a tale of romance and conspiracy.
Underboss is about Nadia Tarenkov and Carmine Martinelli. She's the only daughter of Bratva boss Igor Tarenkov and has an older brother, Alexander, and he's the eldest son of Seattle mob boss Carlo Martinelli and has two younger brothers, Shane and Rafe (aka Rocco). Carmine's got one mafia family at the top of his list of suspects in the murder of his aunt and uncle--the Tarenkovs--and he intends to get close enough to gather information. Seducing the Bratva princess is a means to an end, but Nadia is a force to be reckoned with. She's one step ahead of him, but it looks like they're both leaps and bounds behind whoever is trying to assassinate Carmine's father while also targeting Nadia herself. They may have faked their start as a couple, but their feelings are beginning to become all too real, as is the danger that looks to be following their families.
I loved how Kristen Proby matched the romance with a good amount of suspense and mystery in this series starter! There was a lot about the book that I appreciated, but at the top of that list would have to be the fact that Nadia was no shrinking violet and that she actually beat Carmine at his own game in the first few chapters. She was strong-willed and stubborn, but she was also smart, sassy, and very loyal to her father. On the other hand, Carmine was someone who I saw as living to the adage of "silent but deadly." He, too, loved his family beyond measure and was more tactical than impulsive. Together, Carmine and Nadia could be intense, but they also had their quieter moments where you could see their relationship evolve and develop. I thoroughly enjoyed reading their story, and I'm very much looking forward to reading the next book in the With Me in Seattle Mafia series. Talk about getting off to a fantastic start! I'm awarding Underboss five stars.
Release Date: 02 March 2021
Date Read: 01 March 2021
Learn more about Kristen Proby.
Purchase Underboss on Amazon | Apple Books | B&N | Kobo.