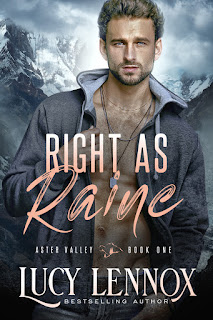 Note: An advanced reader copy (ARC) was provided by the author.
Ooh, I've got a feeling I've just found my favorite new series for 2021! Lucy Lennox kicked off this new year with the prequel novella to her small-town M/M/ romance series, Aster Valley, and now, she's just released the first full-length novel! Right as Raine is a friends-to-lovers slash employer-employee romance with a dash of football thrown into the mix. If you've read Winter Waites, you'll remember that readers were given a hint of who this series starter would be about--and yes, Winter Waites and Gentry Kade appear here, too. That being said, both books can be read as standalones--but read them in order anyway.
Right as Raine is about twenty-seven-year-old Tiller Raine, a wide receiver with the Texas Riggers, and considered one of the best professional football players in the country. Twenty-eight-year-old Michael Vining has been his live-in personal assistant the past five years, although Mikey was only supposed to be his nutritionist and cook. They've gone from employer and employee to actual close friends in the half a decade they've been in each other's lives, but both have been harboring secret crushes on one another as well. Neither can act on their feelings, not when Mikey just happens to be the youngest son of the head coach. But an injury and time away in Aster Valley could be the push they need...
Zing. There was this...zing between the main characters. Like an almost palpable connection that leapt off the proverbial page. Tiller and Mikey were each part of the other's support system, and over the five years they were together as boss and employee and then later, friends, there was this level of comfort that was matched only by their level of awareness of each other. I loved how these two prodded one another to be the best version of themselves, to make them realize that they were capable of much more than they may have initially believed. As with well-written series starters like this one, not only do we get Tiller and Mikey's story, but we meet other characters who we hope will get their own happily-ever-afters going forward, and I'm super excited for book two due in March! For now, I'm basking in the awesomeness that is Right as Raine. Five stars.
-------------------------
Read my reviews for the Aster Valley series: