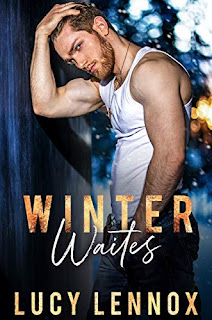 How could a book this short leave me with such long book hangover?! But then this IS Lucy Lennox we're talking about here, so it's not like I should be surprised or anything. Winter Waites was Lennox's contribution to the Winter Wonderland collection of free short stories by M/M romance authors on Prolific Works (I love it when these authors do that!), and now, it's available on Amazon and can still be read for free if you have Kindle Unlimited. This novella is the prequel to a new series, Aster Valley, which is set in a small town located in Colorado (and yes, Google tells me there is an actual town by that name!).
Winter Waites is rock star romance and has features an instant connection between the main characters. The titular character is a twenty-eight-year-old occupational therapist, specializing in a patient's upper extremities, while the other main character is Gentry Kane, singer and songwriter of Gentry's Unlimited Sweets, better known by its acronym GUS. When Gent catches a glimpse of Winter during a concert, he's immediately smitten by the man. But hopes of meeting with the man dissipates when Winter abruptly leaves, leading to Gent to release his frustration in a manner that leads to him needing therapy on his injured hand. What happens when his therapist ends up being none other than the very man who captured his attention during the concert? Is this only meant to be a fling while Gent is on break, or could it be the beginning of something much more for the two?
Le sigh. This novella was so darn sweet, but it also had that steam that double its enticement. This isn't necessarily an insta-love romance; I prefer to think of it as more of an insta-connection one, or maybe a destined romance, especially since the circumstances from the time Gent takes note of Winter at the concert and then when Winter shows up at his front door made it feel as if they were meant to be. There are the expected complications to pursuit of something more permanent and committed between them. After all, they live in different states and there's the whole hassle of Gent being a who he is and garnering the attention that he does. I give kudos to Lucy Lennox for not making this the usual story about secrets, whether it be about sexuality or a relationship. Winter Waites was about finding and fighting for love, and I so adored it. It gets five stars.
Release Date: 02 January 2021 (Prolific Works); 26 January 2021 (Amazon)
Date Read: 02 January 2021
Learn more about Lucy Lennox.
Purchase Winter Waites on Amazon.