Review: The Bromance Zone by Lauren Blakely (The Good Guys #1) 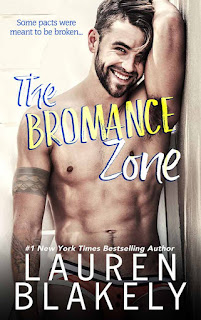 Note: An advance reader copy (ARC) was provided by the author.
Lauren Blakely is one my favorite go-to authors when it comes to romance, and for good reason. She's insanely creative when it comes to the stories she comes up. One of her more oft tapped on romance tropes is friends-to-lovers, and Blakely adds her own twist to it in the first book in her new The Good Guys series. The Bromance Zone features best friends River Michaels and Owen Hayes. For fans and readers of Blakely, River bartends at The Lazy Hammock, the bar he co-owns with Grant Blackwood, and Owen is the public relations guy for the San Francisco Dragons, the baseball team Declan Steele plays for. Yes, that Grant and Declan from the much adored Men of Summer series. That being said, if you're new to this author, you don't necessarily need to read any of the books in the aforementioned series. HOWEVER, it's an awesome trilogy, so GO READ!
The Bromance Zone finds besties River Michaels and Owen Hayes eight years into their friendship and sticking to their no-sex-between-friends pact, but it's a pact that's been getting more and more difficult to abide by recently. Twenty-nine-year-old River co-owns a chain of successful bars, but he hasn't been all the successful when it comes to his romantic relationships. The same could be said for twenty-eight-year-old Owen, who may be steadily climbing the ladder at the baseball organization he works at, but he's been struggling to keep his feelings for his best friend in check. River and Owen may be able to pretend they aren't attracted to each other, but could a trip to Tahoe that leaves them stuck in a cabin finally break them out of their self-confined bromance zone? When the snow melts away, though, will they go back to the way it was?
I've been itching for River and Owen's story for what feels like forever! In reality, though, it's only been a few months since Lauren Blakely hinted at them getting together, so the wait hasn't been all that long. But that's what happens when two supporting characters are as notable as these two were. I get all eager beaver and need their story ASAP! I appreciated the fact that these two tried their darnedest to stick to their pact, even when they had well-meaning friends making efforts to get them to see that this was one pact worth breaking. The tension was palpable and once the proverbial dam broke, holy hotness! Of course, getting to that happily-ever-after wasn't easy-peasy--communication is key, people!--but I love that Blakely didn't make them--and us--"suffer" too long. The Bromance Zone gets five stars. I can't wait for TJ's story next!
Release Date: 26 October 2021
Date Read: 25 October 2021
Learn more about Lauren Blakely.
Pre-order The Bromance Zone on Amazon | Apple Books | B&N | Kobo.