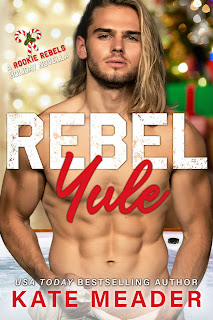 Note: An advance reader copy (ARC) was provided by the author via Wildfire Marketing Solutions.
Kate Meader is ringing in the holidays, and I am all for it! Rebel Yule is a new novella in Meader's Rookie Rebels series, and it features everyone's favorite Swedish hottie on ice, Erik "Fish" Jorgenson, and the personal assistant who hates him, Casey Higgins. If you're new to the series, you can dive right in without feeling lost. I've only had the opportunity to read the first two in the series, but with the release of this holiday novella, I'm reminded that I need to play catch-up on the ones that I've missed in between. I swear, my life is a case of "so many books, so little time," but I'm pretty sure I'm not the only one.
Rebel Yule finds Swedish import and Chicago Rebels goaltender Erik Jorgenson needing to find out why Casey Higgins despises him as much as she's made it plain to see. Every single time he's headed to a meeting with the team's CEO, it's clear that Casey barely tolerates being in the same space as him while he's waiting. He doesn't quite get why she can't stand him, especially since he's liked by everyone else. He finally gets his opportunity to learn the truth the night of the team's holiday party, but how will he handle it and what will it take for him to get back into good graces of this fiery woman?
I always say that the best kind of novellas are the ones that feel like they're full-length novels, not in terms of number of pages (obviously!), but more of the story and character development. And Kate Meader delivers exactly that with Erik and Casey's book. I liked seeing these two get from where they were in the first chapter to where they were by the time we get to the epilogue. In the fewer number of pages than the books that came before it, Meader packed a complete story that didn't leave me wanting. Rebel Yule, however, did leave me with a need to read more from the other Rookie Rebels. 4.5 stars!
Release Date: 12 October 2021
Date Read: 12 October 2021
Learn more about Kate Meader.
Purchase Rebel Yule on Amazon | Apple Books | B&N | Kobo.