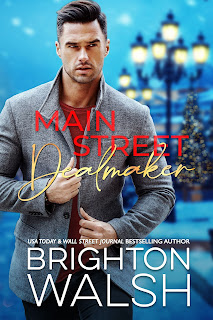 Note: An advance reader copy (ARC) was provided by the author via Wildfire Marketing Solutions.
It's been about a good three and a half years since I last read something penned by Brighton Walsh, so when I learned she had a new series, I took the opportunity to re-acquaint with her writing. Main Street Dealmaker is the first book in Walsh's Holidays in Havenbrook, and this small-town romance has some definite enemies-to-lovers feels. Readers are introduced to Sadie Rollins and Cole Donovan, the former being a twenty-eight-year-old wedding planner and bed-and-breakfast owner, and the latter being a thirty-three-year-old divorce lawyer with a reputation for being cutthroat for his male clients. Since his own marriage ended four years prior, Cole hasn't been as drawn to any woman as he is to Sadie. Unfortunately for him, she's made it clear she can't stand him, not when he singlehandedly helped her twin's ex get more than he deserved in their divorce. When they help out her cousin, could it finally spark something between them?
This was a good read, even if it did take a bit for me to warm up to Cole. I got a better feel for him as the story progressed and more of his layers were peeled back. He had his reasons for being as ruthless of a lawyer as he had become. I did like seeing his growth throughout the book, having grown tired of the life he'd been leading and beginning to see that maybe love and commitment weren't things he had to actively steer away from after he and Sadie got together. Speaking of Sadie, I loved how much of an independent and determined woman she was. Her relationship with her twin sister, Elise, was interesting, and I hope that we get more of her story as the series moves forward. I think my favorite part was the epilogue because I don't think I could have picked a better ending for Sadie and Cole. Four stars for Main Street Dealmaker. I can't wait for book two.
Release Date: 28 October 2021
Date Read: 28 October 2021
Learn more about Brighton Walsh.
Purchase Main Street Dealmaker on Amazon | Apple Books | B&N | Kobo.