Review: Twice in a Lifetime by R.M. Neill (Sheltered Connections #1) 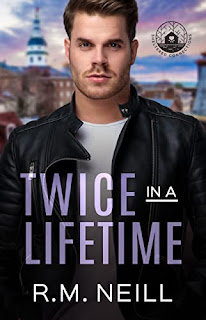 Note: An advance reader copy (ARC) was provided by the author via Gay Romance Reviews ARC Team.
R.M. Neill is a new-to-me author, and my introduction to her writing is by way of Twice in a Lifetime, the first in her Sheltered Connections series. This being an advance reader copy (ARC), there were certain things that needed some cleaning up, so I'll be borrowing the finished copy via Kindle Unlimited to compare the two once it's been released. For now, this review will be focused on the story itself, which is about Dominic Morenzo, a widower who owns Wild Baloney, a specialty meat and butcher shop, and Micha Jones, a pet groomer who owns Fuzzy's and cat dad to Tux. Two years after losing his beloved wife, Jenny, Dominic decides to move forward by adopting a dog from the local shelter, Austin's Animal House. When he meets a black Labrador mix named Maggie, he's smitten; when he meets Micha, he's mesmerized, but will it make a difference when he realizes that Micha isn't a woman? Can Dominic actually find love twice in his lifetime?
While not necessarily an insta-love romance, there's that instant spark that happens between Dominic and Micha. Things progress really quickly, especially on Dominic's part, until Micha pumps the brakes for a bit. The former's bisexual awakening was something he adapted to without a whole lot of quibbling, which was interesting. You'd think it would have given him more pause or moments of hesitation, but nope, he went with it like a duck to water. There isn't much unnecessary drama-rama that happens in the story, and everything pretty much plays out the way I expected it to, including the cause of the conflict between the main characters. Overall, Twice in a Lifetime was a 3.5-starred read, but like I mentioned earlier, I'd like to read the finished copy, so my rating could change.
Release Date: 27 October 2021
Date Read: 23 October 2021
Learn more about R.M. Neill.
Pre-order Twice in a Lifetime on Amazon.