Review: Out of the Blue by P. Dangelico 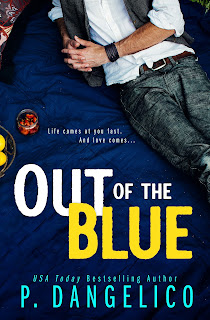 Note: An advance reader copy (ARC) was provided by the author via Valentine PR.
It's been about a couple of years since I last read something from P. Dangelico, so I relished the opportunity to re-acquaint myself with her writing by way of her new novel, Out of the Blue. This is to story of a twenty-nine-year-old woman named Blue Baldwin. She's a former paramedic who now runs Mother Goose Rescue, an animal shelter. She's pretty much content working alongside her mentor and friend, Mona Harris. Then they receive word that a movie star will be moving in for a period of time, and not necessarily out of the goodness of his heart. This is a last ditch effort to give Aidan Hughes public image a much needed makeover. Not only has he got his assistant in tow, but he's got his older brother, Shane Hughes, a former lieutenant colonel in the military, along for what could be a bumpy ride. Life is about to get complicated for Blue.
This was a good slow-burn romance, but at its very core, this was Blue's journey, with the romance aspect part and parcel of it. I'm making the conscious choice to not mention who Blue's love interest because I feel like it makes for a more interesting read when you everything unfolds as you're going from page to page and chapter to chapter. The book is told exclusively from Blue's perspective, which I think works for a story like this since this is more Blue's tale to tell than anyone else's. That being said, kudos to P. Dangelico for the noteworthy cast of peripheral characters that made this an even more interesting and entertaining story, with the three most obvious ones being Mona, Aidan, and Shane. It was fun being able to dive into something new from Dangelico, and the fact that this was set in an animal shelter is like such a sweet bonus. Out of the Blue easily earns four stars.
Release Date: 26 October 2021
Date Read: 25 October 2021
Learn more about P. Dangelico.
Pre-order Out of the Blue on Amazon | Apple Books | B&N | Kobo.